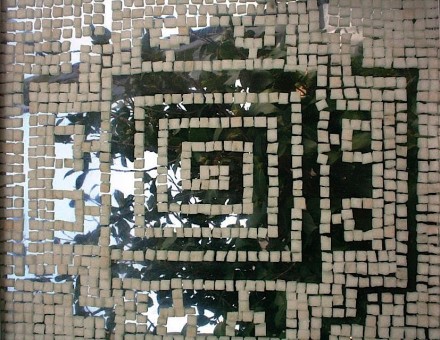 (November 2011) It could have been really great. Unfortunately Marmomacc’s Marble Forum in Hall 7B fell short of the mark owing to poorly presented project devoid of explanation. And where explanations were offered, they were in Italian only. Presentations and lectures were also only held in Italian.

Now to the presentations. Arthà Company showed their „Transparent Stone Mosaic“. Here 18 mm thick marble is sandwiched between and integrated in glass plates. It could be used as a window exposing the stone’s bright colour and multi-facetted inner structure. Scrap stone could be used giving it a new lease on life.

Integrated LED-lights allow „Transparent Stone Mosaic“ to be implemented for interior design as well, e.g. in bathrooms, as table tops or lampshades to name but a few possibilities. Since mosaic always has joints, the background can remain visible and add to the effect.

Design by Dr. Alessandra Ticozzi. The product is patented.

Designer Paolo Ulian showed his work commissioned by Le Fablier Company of Italy. Renowned for its wooden furniture and excellent craftsmanship, Le Fablier invited the artist from Carrara to design an object in marble. One of the challenges was to design a piece which could be produced with little or no waste.

„Numerica“ („Numerical“) was the name Ulian gave his bookshelf giving flooring tiles 35 x 35 cm a new meaning. He developed modules picking up on the Roman numerals I, II, II and IV.

Another bookshelf bears the name „Primitiva“ („Primitive“) using the same flooring tiles which can be assembled to cubes, or shelves.

„Concentrico“ („Concentric“) is the name given to tables made of 90° modules measuring 60 x 60 cm made of concentric ring and cut by means of a water jet.

„Autarcio“ („Autarchic“) is a three-layered marble tabletop each of which has a identical but offset cut-out. The cut-out material is integrated into the table’s legs. The tables measure 50 x 50 x cm and 50 x 100 cm respectively.

„Brecciato“ („Breccia“) also began as a conglomerate of a variety of stones turned tables. The table top is seemingly broken into several pieces, each of which is mounted on wheels and can be rejoined like pieces of a puzzle. Each of the pieces has at least two straight sides and at least one irregular side.

„Caldia Cube“ was another presentation where Marmi e Graniti d’Italia Sicilmarmi Company, commissioned three artists, three designer and 3 architects to create an object made of marble. See our story on the project in the July issue.

Seating for public streets was developed by the Milan Polytechnic School designed by Massimiliano Nocchi and Andrea Giacomono Tazzini and produced by Up Group Company of Italy.

Another design project, not exhibited at the Marble Forum, was Laboratorio del Marmo Company’s book shelf presented at the fair.

„Luce e Materia“ („Light and Matter“) by Solubema Company of Portugal and Merbres-Sprimont of Belgium will be presented in a subsequent issue.