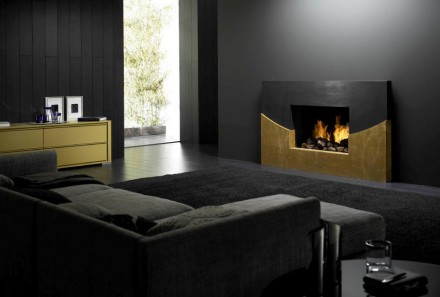 (September 2009) Arriaga Stone recently received the honour of this year’s Red-Dot-Design-Prize for its unconventional fireplace design. The prize is unique in that it is awarded for mass-produced goods, which are deemed outstanding in quality and functionality while at the same time meeting highest aesthetic standards for form.

Below we will be describing some runners-up in the palate of Arriaga-Products.

It was designer Josep Guiu’s vision to let the customer participate in designing his fireplace. To this end the front encasement can be rotated. Model „Moon“ allows the curvature to run vertically or horizontally, as the customer wishes.

The Red-Dot-Jury gave „Sun“ honourable mentions – a fireplace set behind a bull’s-eye by designer Guiu. The award-winning „Cubic“ design has the front set in front of the wall and curved into the room. It should also be mentioned that the instructions are easy to understand even for the layperson.

The fireplaces are available in a variety of stone.

Natural stone plays a role in another Red-Dot-Award-Winning entry for fireplaces. The garden barbecue produced by furniture manufacturers from Germany, it stands on two blocks of basalt.