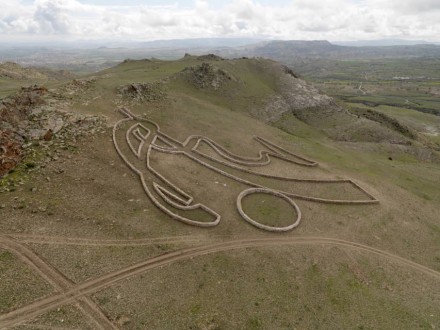 (January 2010) Geoglyphs are the theme this time around. These are long stone lines meandering across the landscape – they became popular during the course of anthropological studies of the Nazca-Culture of Peru where they were often interpreted as runways for aliens’ landings sites – see below with a few new information.

Melbourne’s Andrew Rogers also draws such lines – across the Australian landscape. The Rhythms of Life Land Art undertaking revolves around basic dimensions of civilization, around history, around myths and around evolution and devolution.

His main theme is „emotion and the cycle of life“, as reported in Wikipedia. The artist often finds the model for his Land Art in ancient rock carvings, paintings and legends of past eras.

Rogers’ material is stone, available all around the site of creativity. He prefers secluded areas like deserts or mountainous regions, all of which have a sense of eternity or secretiveness about them.

Another distinguishing mark of the artist’s land art is that everybody participates e.g. by collecting building material or stacking rocks to create a wall. Even the army is called on to pitch in, as was the case in the Gobi Desert in China

Most recent works include the „Time and Space“-Geoglyph Park which was completed in Mai 2009 in Capadocia, Turkey – another of those mythical areas. 10.500 tons of stone went into the project extending over a length of 7 km inspired by millstones or palms visible from a birds’ eye perspective. Our photos show some of the object. Descriptions are included in the artist’s website.

The famous Nazca Lines located on the Nazca Desert Plateau of Peru are assumed to be ritual sites of the Nazca-Culture created between 200 BCE and 700 CE. The Nazca inhabited the Pacific coast before the lush tropical climate turned arid. Archaeological finds along the line over hill and valley allow the conclusion that the former inhabitants celebrated religious ceremonies there. Perhaps the lines were paths, which the priests or believers walked to summon rainfall – we can only guess.

Scholars recently agreed that the lines are not actually straight, as it would have the appearance from a birds’ eye view. Close up one can see that the lines are humpy lending credibility to the assumption that they were drawn with the help of simple tools and surveying equipment.

The lines are not engraved in the rock but rather made by removing the reddish-brown iron oxide-coated pebbles covering the desert and revealing the sharply contrasting layer below.

Scholars assume that the mysterious figures such as the humming bird, the spider or the monkey, were first drawn in a smaller format on the slopes, which the inhabitants could observe, from the valley. Later, so the theory, they developed further to long lines on the plateau as we know them today.

According to scholars it is mere coincidence that the solstice can be read from some of the lines. There are over 10.000 man drawn lines there.