Many-faceted use of natural stone: Stylites demonstrated the religious immersion in lofty heights 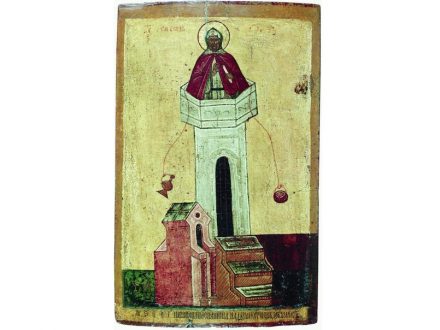 For centuries, Levantine pillar-saints or stylites preached, fasted and prayed atop narrow pillars in lofty heights in an effort to physically approach God

Simeon Stylites (here: the Elder) was said to „roar like a lion“, when in dialog with God, so recounted by his contemporaries. The most famous stylite lived from 390 a.D. to 459 a.D. in the desert in a region known today as Syria, first as a hermit, later atop a marble pillar probably erected by his groupies.

The pillar, while equipped with a small platform, but devoid of any protection from the elements.

The pillar served a dual purpose: reducing the distance to heaven but at the same time elevating the stylite above the masses of simple believers.
Near the end of the classical antique era a veritable rush on stylites was documented even including the odd ruler. The ascetic would preach and deliver advice or sermons, details of which remain sketchy and speculative, e.g. when Emperor Theodosius II and his Empress sought the advice of Simeon Stylites.

We have no details on the construction of the pillars other than that that they are depicted as marble in a number of antique paintings.
The history of the ascetics reveals more detail. At first, they lived as hermits in huts or caves, and, later, on the outer rim of cloisters.

Simeon Stylites, it is said, was chased from the cloister grounds when the monks began taking objection to his self-mortification efforts.
Some ascetics had themselves walled in and accepted food but once a week. They passed the time praying, praising God, and meditating.

Their role models were early Christian martyrs. Just as these had taken the torment of persecution upon themselves, the ascetics made up for lack of hardship by performing self-mortification, and, in so doing, hoped to overcome earthly restraints. 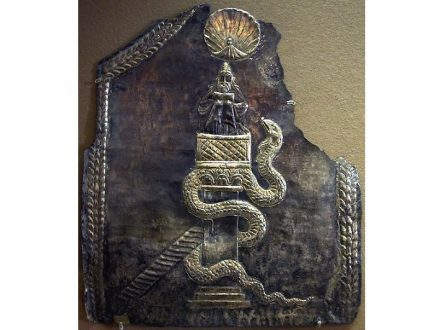 Thus Simeon Stylites, himself, was no longer considered a man of flesh and blood. Demigods were nothing new: the Greeks had to deal with a panopticon of demigods, Jews considered the prophets to be God-sent and the Romans upheld a cult around their dead believing them to continue living among us and coming to call on certain sacred holidays.

Note that the stylites were performers of miracles, mediators and instances of jurisprudence all in one.

But at the end of the Roman Empire the stylite culture petered out for reasons unknown. Perhaps the decline was the result of less excessive religious fervor.

Perhaps climate also played a role: the Roman climatic optimum, a period of unusually warm weather in Europe lasting from about 250 b.C. to 400 a.D. was followed by a cool period.

Perhaps it was then no-longer possible to survive a winter exposed to the elements atop a pillar despite physical closeness to God.