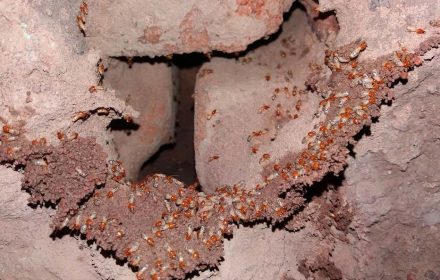 The National Pest Management Association has revealed a high-definition, behind-the-walls look at the destructive nature of termites through the Tiny Termite House, a first-of-its-kind research study and video production. With support from the City of New Orleans Mosquito, Termite and Rodent Control Board, more than half a million Formosan termites, a voracious species of subterranean termites, were introduced into the soil surrounding a tiny, built-to-scale dream home in late-January.

A team of researchers documented and observed their behaviors and the incredible damage they leave in their wake.

Recently presented at the National Conference on Urban Entomology, the Tiny Termite House is verifiable proof of just how quickly and methodically termites can eat away at a structure if left unchecked, consuming critical support beams while tucked out of sight from the human eye.

As termites do not eat stone or brick, homeowners in houses with such building material may feel safe. But it is important to realize that there is a a lot of wood in the structure of any house, and that the termites will penetrate through hairline cracks to get at tehir food. So also here, pest control is needed.

The two-story Tiny Termite House was built to replicate an actual home in Anytown, USA and included many of the same features, such as insulation, plumbing and electricity. Other amenities included hardwood floors, a beautiful kitchen and a balcony overlooking an in-ground swimming pool. Like many American homes, the house was constructed on a cement slab. However, there was one big difference — this house was fully equipped with high-definition cameras throughout to study the termites progress from introduction to decimation.

„On the surface, the house appeared to be in good shape with minimal clues about the presence of termites. However, it was what was happening inside the walls and under the floors that showed the real story. This termite colony got right to work, forming mud tubes and turning this dream home into a danger zone,“ said Jim Fredericks, Ph.D., chief entomologist for the NPMA. „We were surprised to see that the termites acted much like they would in a true-to-size home, finding vulnerabilities in the structure first and then quickly began making their way up from sub-flooring and joists and into the walls.“

Key Findings:
1. The subterranean termites required moisture to survive and were most attracted to moist areas around the home.
2. Upon introduction into the soil, the termites immediately found the structural weaknesses of the foundation, specifically at the corners of the home where the wood came together.
3. Mud tubes, pathways constructed by termites to reach a food source, were built inside the walls on the studs, but not on the outside of the sheetrock, making them hard to find.
4. Once the mud tubes were built, the termites attacked the floor joists before moving up to the wall.
5. The termites introduced moisture to the areas inside the home where they were feeding, which caused the floors and walls to buckle.
6. During the final tour of the home, researchers found that practically all the floor and wall joists were eaten away.

For more information on the Tiny Termite House, visit PestWorld.org.