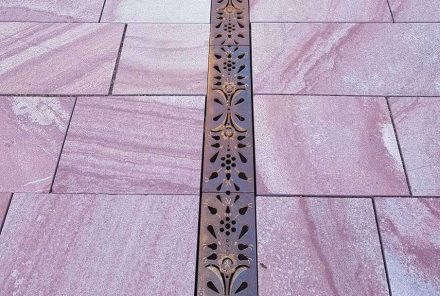 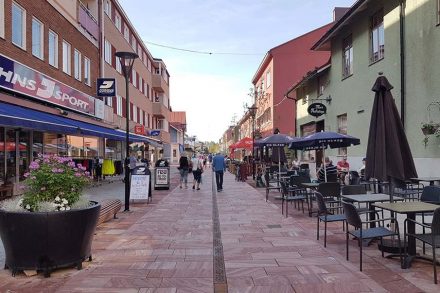 Sweden’s town of Mora refurbished its Kyrkogatan pedestrian mall – the most noteworthy element is the natural stone pavement: it is made of Älvdalsk-Quartzite, optically unmistakable. The message? Simple: the stone is local because landscape architects at Sweco wanted to convey a feeling of home. The aim was to return the mall to the citizens and give them a sense of identity.

In the past 40 years this important part of the city center had become an eye-sore: It was never properly redeveloped – problem areas were merely fixed, so in the end, the pavement of the mall looked like a patchwork quilt. 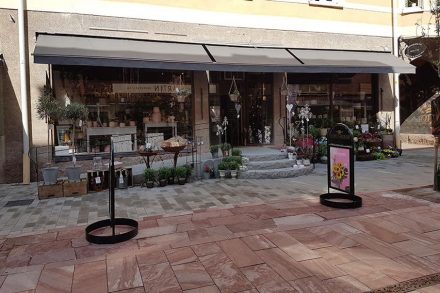 The asphalt was red to begin with but look more like plastic than anything else.

Now the planers gave the street a work-over. From left to right there are picture-window areas with concrete stone followed by a narrow strip of red quartzite and finally a broader strip of the same stone.
An obvious rain trough serves as a hinge to the right side.

It is worth taking a birds’ eye view of the surface:
∗ The narrow natural stone strip has a split surface;
∗ The wider natural stone strip is made of slabs with sawed surface – level but sure to grip;
∗ The rain trough acts as a run-off and is covered with cast iron plates. Here, too, the feeling of home is of the essence: the design alludes to the so-called „Kurbits“, typical regional paintings. 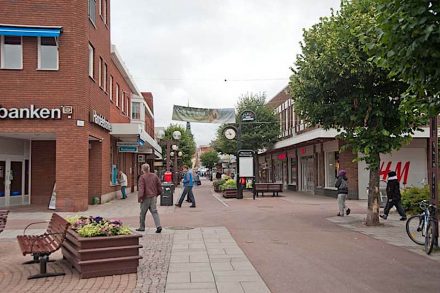 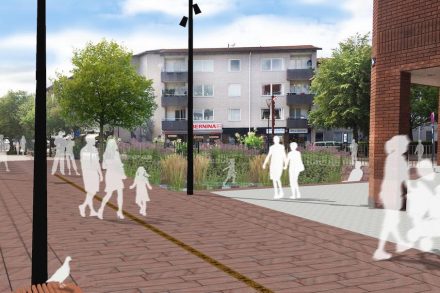 The stringently straight lines guide the orientation from start to finish accentuating the mall feeling. But did the designers want to turn Kyrkogatan into a race strip?

Not at all! There are shops right and left. The design builds a bridge to the local highlight: Mora is the finishing point of the famous „Vasaloppet“ (Vasa-Race), a cross-country skiing competition stretching across 90 km. The straight lines could be interpreted as a never-ending track.

To animate pedestrians to linger benches and street furniture with seats were installed as well as new lighting.

A pond with a small quartzite wall constructed vis-à-vis the pharmacy is another particularity of urban design: because of global warming downpours are to be expected more and more often. The pond is meant to catch the rain and act as a buffer.

The rain-trough is constructed to cope with brief extreme downpours. The city officials willingly approved Sweco’s plan as they would otherwise have had to renew the entire canal system.

The most prominent building with Älvdalsk-Quartzite is the PK-huset in Stockholm with offices and stores, formerly a bank.