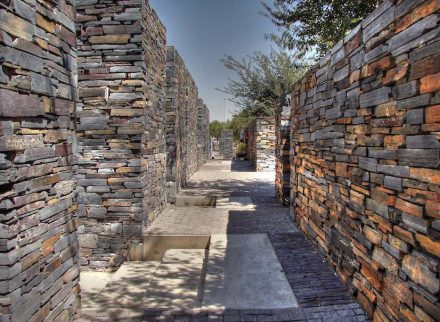 Some African countries have seen very positive economic development in the past years. Forerunner is Mauritius with a growth of wealth of the population of over 120% and the highest per capita income of the continent. Other positive developments include that of Ethiopia, Rwanda, Ghana, Botswana and Kenia. „We expect Mauritius, Ghana, Rwanda, Kenya, Ethiopia and Uganda to be the strongest performing wealth markets in Africa over the next ten years“, according to analysts of New World Wealth based in Johannesburg, South Africa.

They have developed a novel method of ranking countries’ economic strength using the wealth of citizens to gage the economy. Real Estate, Investment funds, stakes minus debt and the citizens’ obligations all play into the statistics. The State economy as such is not reflected in the data.

But the big picture on the continent shows a wide variety of situations. Three big countries, namely the Republic of South Africa, Egypt and Nigeria put down a weak performance.

In its most recent study, „The 2019 Africa Wealth Report“, analysts took a close look at cities with the highest standard of living of the population. The calculation is not based on per capita income but on the wealth of city dwellers.

The analysts pay particular attention to the wealthy and super-rich portions of the population in these cities because they portend that it is possible to interpret the general situation from this group.

Johannesburg takes first place with collective wealth of 248 billion US-$. A large portion of it is concentrated in the northern district of Sandton where the stock exchange and big banks and companies are located.

Cape town has collective wealth of 133 billion US-$. This is where Africa’s most exclusive suburbs the likes of Clifton, Bishops court, Camps Bay and Bantry Bay are situated. The city is very popular as a second home for the well-to-do of the whole world.

In Cairo the collective wealth of the population amounts to 129 billion US-$. More billionaires live in Cairo than in any other African city which has some bearing on the economic situation of the population in the rest of the country.

Lagos, Nigeria marks 96 billion US-$. It is the largest with respect to population and gross national product.

Durban and Umhlanga chalked up 54 billion US-$ each. Looking for the cities with the greatest growth coefficient, Umhlanga and Ballito rank highest in the growth of South Africa.

Nairobi reaches 49 billion US-$ and is the economic center of East Africa and one of the fastest growing countries worldwide. 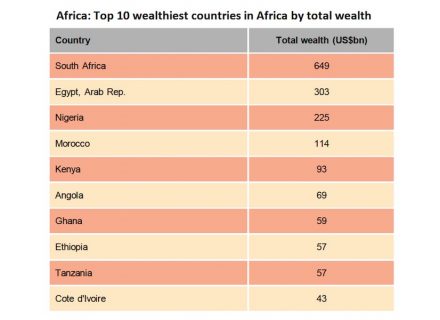 The table shows African countries with the greatest wealth in the hands of the population. But the figures are statistic values; true insight into the buying power of a country can be obtained only by including the headcount and further factors into the equation.