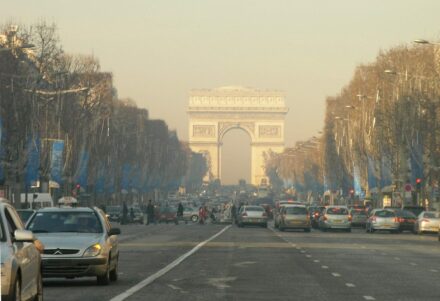 The natural stone on the facades of the Arc de Triomphe is the limestone Château Landon, in the generic term Pierre de Souppes. Its varieties come from the area around Souppes-sur-Loing, a town about 100 km south of Paris.

Initially, there was only the Loing River and the Seine as a water connection to the capital from there, later a canal was added.

The limestone was formed about 35 million years ago as a deposit in a primordial sea of the Eocene.

For the Arc de Triomphe, even its own quarry was put into operation, so much material was needed and so quickly it should be delivered according to the wishes of the emperor. The quarry master Joseph Combe from Souppes became famous at that time.

The limestone Château Landon itself, however, became famous less for the Arc de Triomphe than for the Sacré-Cœur Cathedral, and that because of its snow-white color.

The impressive building on Montmartre has never had to be cleaned on the outside since its completion in 1914.

This is due to a special feature of the stone: under the influence of rain and sunlight, a chemical reaction takes place in its surface, releasing calcite. This is deposited as a snow-white layer on the surface and is constantly renewed.

Upside-down world: with this stone, the typical black discoloration of the outer skin is only present in those areas that are protected from wind and weather.