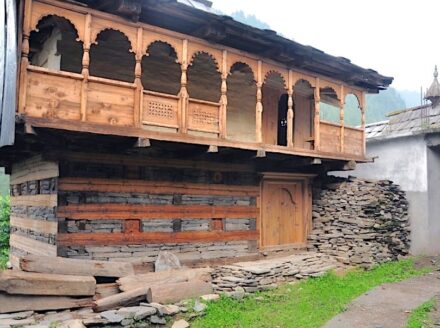 A special type of drywall exists in northern India in the foothills of the Himalayas: Kath-Khuni is the name of the construction method, and it is described as earthquake-resistant. As one would expect, these are walls entirely without mortar, but with units of long wooden beams inserted into them in a regular pattern. The is roof covered with slate. The construction method is still found in some villages, various initiatives want to preserve the know-how.

The name suggests what it is about: the word kath means “wood“ and khuni means “corner.“

In the construction method, the walls are made of alternating layers of stone with those in which the stone is distributed inside long wooden beams. In the corners, the wooden beams meet – once coming from one direction, then from the other. 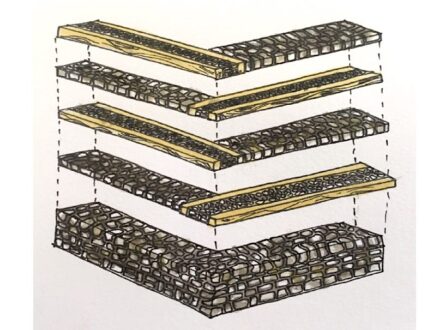 With wooden nails or pins, they are each connected to the layer below. In addition, the pairs of beams are held together by wooden joints, for example, so-called dovetail joints.

The wall layers sometimes have exteriors of precisely hewn ashlars with smaller stones in between.

The large thermal mass of these walls, about 60 cm thick, is said to provide stable temperatures inside, according to the descriptions.

Presumably, however, it also needs a plaster to keep the wind circulation in check. On most of the buildings one finds walls with mud, which, however, hides the pattern of wood-stone layering. 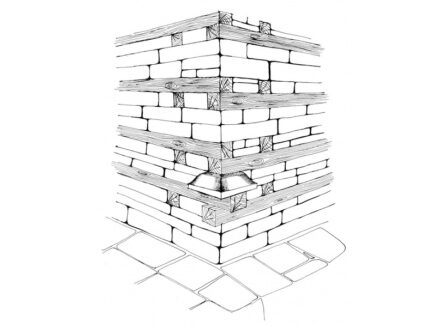 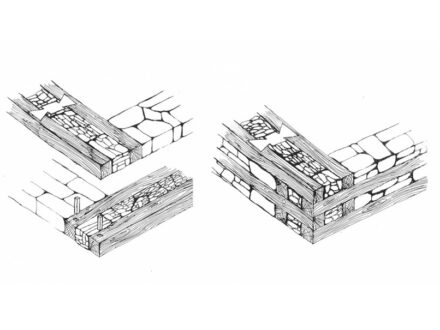 Locals state in videos that even without such exterior plaster, a Kath Khuni house has pleasant temperatures throughout the year. In any case, in the past the stables for the animals were located on the lowest floor. The people on the upper floor benefited from their warmth, as is also known from farmhouses elsewhere.

Therefore, cantilevered floors on the upper levels are typical for the Kath-Khuni construction method. They not only create more living space, but also bring more light into the rooms.

This is because the floors below have only small and low windows and doors. There is also a religious explanation for this: people should bow down to the spirits living in a house when they enter it, it is said.

There are numerous reports that such buildings survived earthquakes in the area, while modern buildings collapsed around them. However, we have not found any exact analyses of what this seismic stability is based on.

There is no doubt that Kath-Khuni is an example of architecture that is adapted to the conditions in the mountainous region: only materials that are available locally are used, and only components that can be moved without machines. 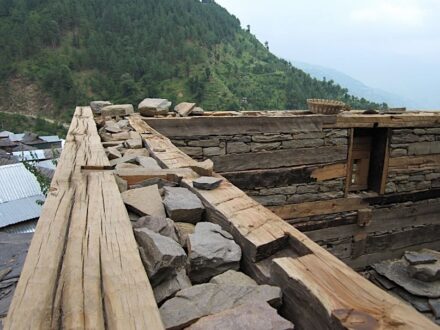 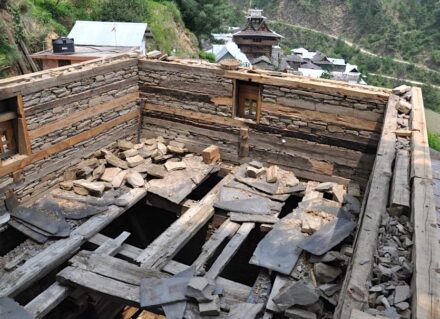 The locals used to build their houses themselves, the sources say. Nowadays, however, there are some obstacles to this: building with concrete is considered cheaper and better, and government protection measures for the native Himalayan Cedar (Cedrus Deodora) have reduced people’s access to the tree population.

Not only farmhouses of Kath-Khuni construction can be found in the Himachal Pradesh region. Also, large temple complexes even with towers are built this way. Here, the stones for the outer walls are often precisely hewn and the wooden beams are often decorated with artistic patterns. Sometimes the beams extend beyond the corners, are designed as boxes and richly decorated.

A BBC report mentions the architectural firm North in Naggar, which is working hard to preserve the old building tradition.