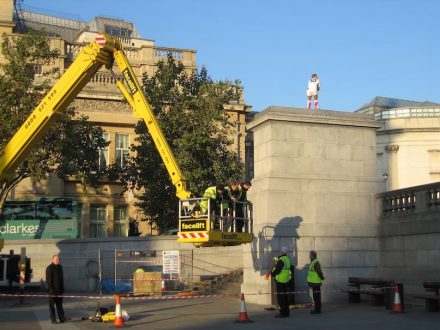 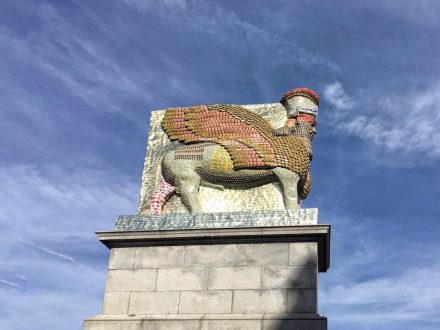 The Fourth Plinth of London’s Trafalgar Square is a London specialty: Long bare due to lack of funds during Queen Victoria’s Reign, it serves as a presentation pedestal for modern art since 1999. The photo at the top shows a piece from 2007 originating from Madame Tussauds’ Wax Cabinet and depicting a famous soccer player. Until 2020 works by artist Michael Rakowitz will be on exhibit there: it represents an Assyrian sculpture destroyed by the ISIS had destroyed.

The 17th International Symposium for Monumental Sculpture in Oudon, France, will take place in 2019 from August 04-18. The topic is „Dance“. Application is open until February 01, 2019.

Stone Skipping and the science behind is the topic of a report in Wired magazine.

Researchers from Germany, Spain and France have developed a liquid which can protect natural stone against acid rain and biofilms.

About 125 artists from the Netherlands, Germany, Denmark, and Sweden present their works until end of November 2018 during the „kunstmaand“ (Art Month) on the Dutch island of Ameland.

Geological maps can be downloaded from the portal One Geology.

Architecture and Urban Spaces is one of the categories of the Siena International Photo Awards. The 2018 winners have been released.

British Arts Minister has released an export bar for £5 million ‘Bust of Peace’ by Antonio Canova symbolizing the end of Napoleonic era and a return of peace.

In Germany, a 23-t granite block has fallen from a truck onto a motorway.

Video of the month: Scientists of the University of Utah have discovered that wind in passing through a natural stone arch produces an individual acoustic pattern. Scientists are now attempting to determine whether the sound pattern allows conclusions on stability of the arch (1, 2).