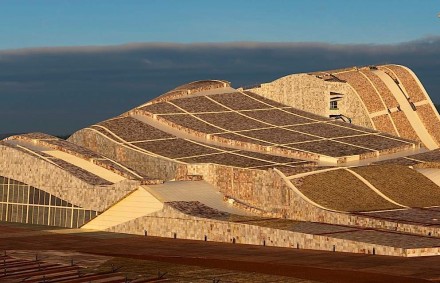 (November 2011) In Northern Spain’s Santiago de Compostela one of Europe’s most ambitious building projects is currently under way: on the hills above the city prominent US-American architect Peter Eisenman is erecting a City of Culture. And as is the case for Jerusalem and Rome, two of Christianity’s most important pilgrimage sites, everything about it revolves around magic and belief.

So the inauguration of the Library of Galicia and the Archives of Galicia were celebrated on 11.1.11 – a palindromic sequence often interpreted as a sign of fate in ancient times as we described in the case of Prague’s Charles Bridge in a past issue.

The go-ahead for the project was equally enveloped in belief and mythology: the decision was made by the Autonomous Community of Galicia in 1999 at the start of the Compostelan Holy Year which also begins at a symbolic date.

Thus the scene was set for a truly meaningful project: the Cidade da Cultura was destined to capture the historic importance of Galicia in Europe and turn it into a sort of cultural-spiritual atelier for future generations. It extends across 265,000 m² and comprises 6 prominent buildings.

The region is not to be confused with the West-Ukrainian area bearing the same name.

Of course such high expectations were predestined to be fulfilled by a world renowned architect. The winner was Peter Eisenman. His concept ties in old and new but at the same time it is so spectacular that it will draw „pilgrims’“ attention as a modern pilgrimage site, setting a landmark which is completely integrated into its surroundings.

Eisenman has incorporated a number of mythological assimilations into the concept as called for by the project’s fathers.

Let us first take a look at the global picture of Cidade da Cultura. Eisenman gave the hill a new crest in the shape of a scallop a symbol for pilgrims over the centuries – today often reduced to a symbol for a well-known oil producing company.

Whereas the original concept showed the shell’s contours clearly, they are now watered down considerably. But the typical furrows of the pecten jacobaeus are clearly definable: Eisenman hollowed out segments between the buildings, creating a reference to the ancient city at the foot of the hill where lanes between houses are common. Within the Cidade da Cultura the highest building is never-the-less 42.5 m high.

Eisenman makes reference to another distinguishing mark of the ancient city centre: the column passages on the ground floor of the buildings where people can take refuge from the rain – the region has the highest rate of precipitation of all of Europe.

Again as in the ancient city centre, passages often widen to open places.

Cidade da Cultura reminds one of a hunch-back touched by the uncanny geological might of the area. The impression is reinforced by the opulent use of natural stone: the outer shell of the buildings is clad in split quartzite with the exception of glass fronts giving the buildings a primeval appearance. The buildings’ fronts are yellow to grey whereas a reddish variety was used for the roofing. It is Eisenman’s first encounter with natural stone for a building concept.

Distinctive, too: the lines running across the rooftops, which are even visible from below. Saw-cut quartzite was used here lifting the surface and colour optically from the rough surroundings.

Let us dwell on the lines for a moment as they play a central role in Eisenman’s architectural concept.

Mankind has long held the belief that imaginary lines across the sky and the earth determine a person’s fate and guide migrants on their journey. Thus the milky way was interpreted as a marker for souls on their way to God; Christian pilgrims believed that St. James’ Way to Santiago de Compostela was invisibly traced into the landscape.

Ley lines, the geological alignment of points of interest, are thought to bundle energy.

Eisenman spanned an entire network of lines over the Cidade da Cultura. They form the grid in the cobblestones and mark the facades of buildings and roofing. Superimposed upon the small grid is a larger one slightly shifted and bearing a different colour.

Eisenman also carved deep grooves over the rooftops. In order not to compromise the understructure he simply layered the raw stone slabs (50 x 50 cm and 5 – 8 cm thick) on top supported by steel girders to which they are bolted. Precipitation is collected along the joints and ultimately runs off over the steel-reinforced concrete roof thereunder.

Fascinating to see how consequent Eisenman is in implementing the linear grid. The lines dip as they run from the roof to the façade and even continue in the window front. The grid-lines can even be found in the interior of the buildings e.g. in the form of reddish travertine in the white marble floor.

Whatever the belief, one must admit that the effect of the ley lines is grand. It animates the beholder to stop and reflect – which must be the self-acclaimed aim of Cidade da Cultura.

What implication this has on the cost of building, is easy to grasp. Let us turn directly to the architect’s statement: „We don’t search our clients – they search us.“

Completion of the Cidade da Cultura-project is planned for 2015. Next to the library and the archive there will also be the Museum of Galicia, the Centre for Music and Performing Arts, the International Art Centre, and the Central Service complex. The buildings connect subterraneous by a service tunnel.

In sharp contrast: the twin Hejduk-Towers which Eisenman conceived as a house of worship devoid of the nave.

Split quartzite is the predominant stone used in building the Cidade da Cultura. The greater part of it was imported from Brazil. A relatively small portion stems from local sources. At this point Eisenman reached the boundary of his possibilities with his aspiration to use local material. For the interior marble and travertine were used provided by Tino and Ipisa/Campo. Sandstone is also included in the list of stone implemented.

The historical city centre was not built in quartzite, by the way. For it the city fathers used granite from local sources e.g. for siding of the Cathedral.