What drives plate tectonics and thus controls phaenomena from volconoes to ocean and atmospheric circulations? 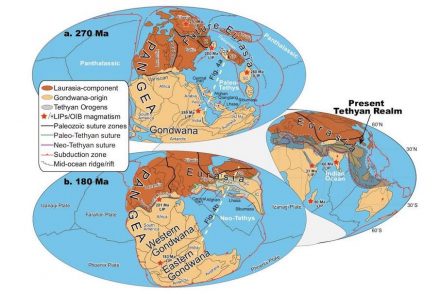 Plate tectonics is founded in the late 1960s, and it concerns the distribution and movements of plates, the upper most layer of the Earth. Plate movements not only control the distributions of the earthquakes, volcanos, and mineral resources in the crust, but also effect the ocean and atmospheric circulations above the crust. Therefore, plate tectonics has been regarded as the fundamental unifying paradigm for understanding the history of Earth.

The subduction of oceanic slabs is considered as the dominant driving force based on observations of Cenozoic subduction systems along the circum-Pacific region. However, the difficulty to observe the oceanic subduction slabs beneath collisional orogens hampers the ability to quantitatively evaluate the role of subducting oceanic slabs. Alternative driving forces such as ridge push, continental slab-pull, plume upwelling and large-scale mantle convection have been proposed at different subduction-collision belts along the Tethyan Realm (see figure on top), the largest continental collisional zone.

The Tethyan evolution can be summarized as many continental fragments were ruptured sequentially from Gondwana and then drift towards Laurasia/Eurasia.

Scientists from the State Key Laboratory of Lithospheric Evolution, Institute of Geology and Geophysics, Chinese Academy of Sciences in Beijing found „switches“ between continental rupture, continental collision, and oceanic subduction initiation in the Tethyan evolution after a reappraisal of geological records from the surface and new global-scale geophysical images at depth. 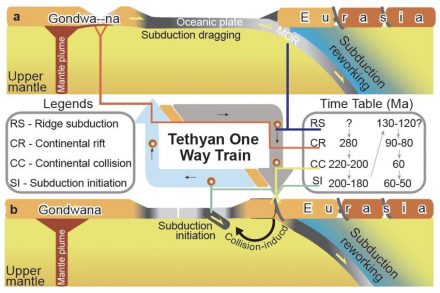 They propose that the „switches“ were all controlled by oceanic subductions. All oceanic Tethyan slabs acted as a ,one-way train’ that transferred the Gondwana-detached continents in the south into the terminal in the north, so they depicted the whole scenario as „Tethyan one-way train“ (se figure below).

The new results will not close the discussions on driving force of plate tectonics, but more future Tethyan research may test the new proposal and improve the understanding of how plate tectonics works.