Despite all Western sanctions, Iran has become a big stone producer and exporter in the last years 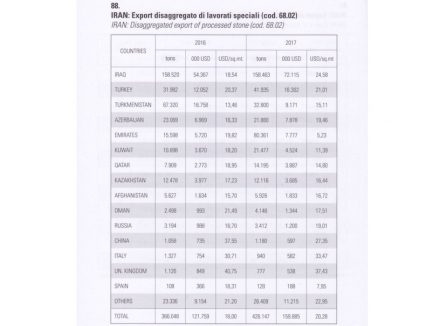 In his statistic yearbook, Dr. Carlo Montani notes that the country’s deliveries go almost only to markets in the East

In the ongoing conflict between the United States and Iran over the killing of General Soleimani by a US-drone, President Trump has threatened with additional economic (and other) sanctions. We took a look at Iran’s natural stone exports:

In his 30th „Rapparto marmo e pietre nel mondo 2019 / „Report marble and stones in the world 2019”, Dr. Carlo Montani gives Iran a whole paragraph and notes an „autarchic vocation“ of the country in respect of its natural stone economy: in 2017, while Iran’s imports in all stone categories reached only about 70,000 tons, exports in raw calcareous stones come close to the magic number of 1 million tons and in processed stone close to 430,000 t.

But the average price per ton is still low, as the tables in the book show.

All in all, Iran’s access to the world stone market is limited to countries in the East (see table above): „Iran exports towards the traditional European and American markets are still marginal, and in the second case, almost non-existent.“

Worth noting is the country’s exclusivity in some stones, e.g. in certain colored travertines. Recently Iran has brought some outstanding granites to the world markets, next to its well-known marbles.

Italian Marmomacchine magazine had Iran as a topic in its isse 263 (June-September 2019) page 58 seq.