Fairs: Ideas Instead of Slabs 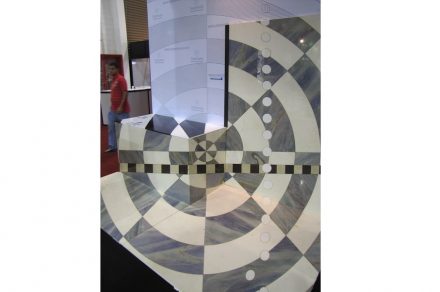 (May 2011) Natural stone is not usually viewed as the material of unlimited possibilities by the creative. But help is at hand: designer Ludson Zampirolli was the invited guest at this year’s Revestir Trade Fair held from March 22nd to 25th in São Paulo, Sebrae, the trade organization for the advancement of small and mid-sized enterprises and showed participants how to play with and realize a few ideas beyond the usual in homes and offices.

The enthusiasm with which visitors embraced Zampirolli’s novel ideas was most surprising: „We had no idea that something of this sort could be realized in natural stone“, was a comment often heard at the Sebrae stand.

E.g. the installation „Anamorphose“ which has its roots in a Renaissance concept and plays with perspective – the motif is completely visible only from one special angle – from all other perspectives the motif is distorted or unrecognizable. Artists historically sometimes used the concept to transmit secret messages. Predominant material used was white Botticcino lime stone and blue Azul imperial quartzite both provided by Rossittis Brasil. 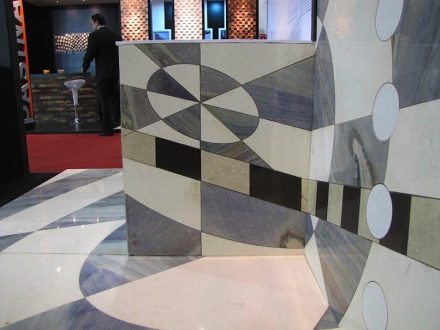 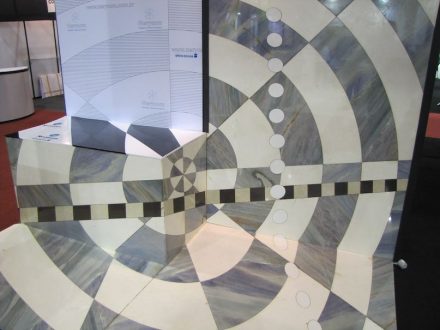 Zampirolli’s „Tampos de Mesa“ („Tabletop“) hanging on the wall as seen in our photo, was also the object of raised eyebrows. The patterns were familiar albeit refreshingly different with respect to the usual tables in Vienna Coffeehouse style. Crema Marfil limestone and Sodalite Blue as well as 3 types of engineered Silestone were implemented.

„Colmeia“ („Beehive“) countertop had a somewhat higher standard to live up in Botticcino and Syenite limestone by Marrom Bahia.

Thoroughly innovative, on the other hand, was the „Butterfly“ coffee table made of Navona travertine and developed by Zampirolli especially for female clients: „Women love butterflies“, according to the designer, himself husband and father of a young daughter, „and women decide on furnishing the home“. So with a view to the target group, he had the fluttering animals cut out of the stone by means of a water jet.

Visitors to the fair were impressed by the unusual combination of natural motif and natural material.

Last but not least let us mention the washbasin „Cuba superslim“ made of Techlam engineered stone by Levantina. The aim was production of light products for e.g. offices: the washbasin is 100 cm long x 55 cm wide x 2.5 cm thick and weighs a mere 8 kg. The work surface on the wall was dubbed „Levissimo“ („Levitation“).

The Revestir trade fair takes place every year in São Paulo and is one of the most important meeting places for architects and designers from the South and Central America. This year the fair counted 42,000 visitors and some 200 exhibitors spread over a surface of 21,500 m². 800 visitors and 40 exhibitors represented 60 countries. Parallel to the trade fair the International Forum for Architecture and construction took place.