Trade fairs: The branch shifts away from mere material 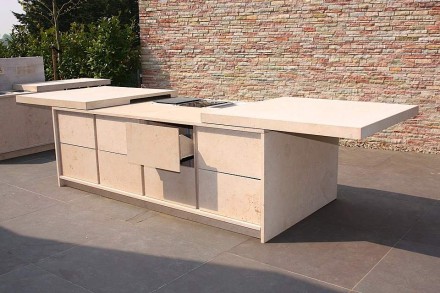 This year’s Stone+tec in Nuremberg saw the first presentation of the Stone+more Awards. Nomen est omen: making more out of stone is the name of the game. The idea was born by Willy Hafner, editor-in-chief of the trade journal Stein and realized in co-operation with Germany’s natural stone, tile, and stonemasons’ organizations. The awards were sponsored by the co-operative organization Naturstein Kompetenz (Gutjahr, Lithofin, Mapei, Rock and Mineral Consulting), Koenig Schmieder, and the Nuremberg trade fair.

We present some of the 19 organizations’ submissions without emphasizing award-winners.

By the way: the fact that all the projects were exhibited at the fair, provided an enormous marketing bonus for the producers – long queues could be seen at some presentations. At stands where no spokesperson was present, valuable marketing opportunities were missed.

A presentation of the projects in German and English will be available forthwith. We will update the providing a link to the website in due course.

Some of the projects were already presented in previous issues of Stone-Ideas.com (before: Businessstone.com). For these, see the links below:

An out-door kitchen was presented by Schwanekamp where not only the drawers can be opened and closed: the cover for the cooking surface is also dynamic and can be pushed aside with a simple slight of hand making the entire element weather-proof. It carries the name „Zenit“.

„Granit hoch 4“ or „Granit 4“ by Böck Natursteintechnik also revolves around kitchens. The fronts are made of 2,5 mm-thick stone sheets on an aluminium honeycomb-construction, giving them the lightness of wood but the durability of stone. One side of the kitchen element is unadulterated natural stone. The back-lit onyx pane is a definite eye-catcher.

Ströhmann Steinkult participated in the competition with several submissions. We present an innovative surface design and glass mountings for stone bathrooms by the name of „Keep up“.

Belgian Parnass company submitted an idea for a transportation and storage modules made of wood by the name of „Deltarack“ – not only light-weight, the elements can be assembled on site to accommodate a variety of needs. A disposable model is currently under development.

Two innovative ideas for gravestones were presented by Herzberg Konstruktionen. One was a tri-pod crane allowing precise manoeuvring and positioning of heavy stone blocks, which can then be mounted with the help of stainless steel bolts on a prefabricated foundation. Thus the gravestone can also be dismounted at any time ready for a new lease on life.

Stone can also serve as protection against attacks even by heavy mortar. For this purpose it must be laminated with alternating material – a technology developed by Grein Tec soon to be presented to the public.