Architecture: drakes on the slate roof 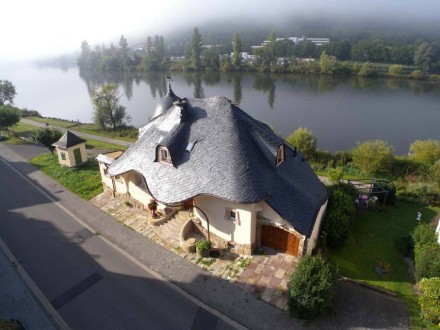 (September 2011) For the landlord it was a dream-come-true: the house could have sprung straight out of a fairytale book and was build reclaiming many an old element which might recount a story or two of its own.

A medical doctor and physiotherapist had the house built to his specifications in the German town of Zell by the river Mosel. The use of natural stone is, perhaps, the distinguishing element lending a distinctly romantic appearance, from the slate roof to the sandstone window frames right down to the stoop and interior flooring. Walter Andre was the architect.

The undulated roof, for one, presented an unusual challenge for roofers. The free-form tiling method used by craftsmen demands a high level of skill. The special technique calls for uncut stone slabs or plates which are brought into just the right shape individually on site.

The total area of the roof is 270 m² for which 17 t of slate were provided by Rathscheck Schiefer Company, the roofing contractor was Grünewald Company.

Gargoyle-rain spouts looking like drakes lend a special accent – in this case, friendly creatures, not the fire-spewing-young-maiden-in-distress-devouring types. The lizard in the floor by artist Przemyslaw Perschke deserves special attention.

Much of the décor was purchased in online auctions according to a press release. „The imposing entrance steps, e.g. came from Dresden and the sandstone embrasures from Belgium, France, and Poland. The flooring stems from French castles.“ Occasionally several visits to the vendor preceded the bid.