9/11 memorial: The absence of victims experienced 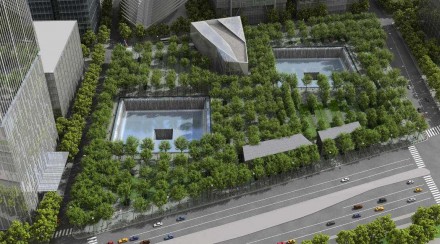 Perusing the memos to our old newsletters, we came across the story of a young man living in Manhattan who happened to be called up to donate blood and stayed in the hospital to help, there he met a woman who had taken the last phone call of her husband: he was on the 110th floor and would not be able to escape, „give the children a kiss from me, I love you, good-bye“.

„Reflecting Absence“ is conceived to allow beholders to experience the memorial according to the concept of architect Michael Arad. The significance is reinforced by continuity – despite the masses of water pouring into the basins, they never fill up, in fact the mass of water seems to diminish as it runs funnel-like into smaller basins.

Arad is the son of an Israeli diplomat. He worked for the New York housing authority. His original draft called for the water surfaces to be integrated in the Hudson River. In an interview he recounts how he asked himself „Could you cut a hole in the river?”.

An enormous effort was invested to ensure continuity of the installation. A miniature model made of plywood was set up in Canada in winter for test purposes until a means of heating the water was developed.

Approval to build a corner of one basin in the original size and material was given to gain an idea of the impact and optical impression. The water was supposed to lend the impression of ropes let down the edge. Part of the test run served to see whether e.g. flowers tossed into the basins would clog up the system.

The basins installed where the twin towers of the WTC once stood, are made of black Jet Mist Gneiss provided by the Bronx company Port Morris Tile and Marble and quarried in Virginia. The surfaces are honed. A total of nearly 5,000 m² are mounted to the reinforced concrete walls or 4,800 tiles measuring 1.50 x 0.70 m and 5 cm thick.

Paving of the plaza was carried out by Port Morris Tile & Marble using African flamed Verde Fountain granite worked for added value in Italy. The basin plates are about 1.5 m long, 0.3 m wide and 8 cm thick. 10,350 m² was the area to be covered whereby 5,850 m² cobblestone cover the space between the basins.

A parapet surrounds the basins and bears the names of some 3,000 victims of the February 1993 bombing of the World Trade Centre and the attacks of September 11th 2011. One will recall: the millennium was marred by the three airplane attacks on the Twin Towers (flight 11, flight 175) and on the Pentagon (flight 77) and in Pennsylvania (flight 93).

During the course of the upcoming year the newly erected 9/11 museum is scheduled to open its doors to the public in Ground Zero Park. The concept for the building is the work of Snøhetta architects.

The costs of the memorial run up to some 700 million US $. 50 – 60 million US $ are estimated to be needed for maintenance annually.

Our report on the 9/11 Pentagon Memorial