Architecture: Ideas for the fifth front 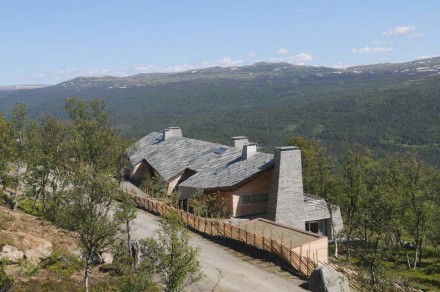 (September 2011) Were we poets, we might write something like this: this cottage is an invitation to the sun to shine. In Norway, where this unusual building is situated, days can be very short, and the weather misty – but when the sun does shine, the entire house sparkles.

The outer walls and the massive chimneys are comprised of 10 – 30 cm thick Oppdal quartzite. It looks rustic because the beholder does not notice the mortar allowing the structure to appear as one continuous wall – 150 tonnes in mass.

The roof, too, is clad in quartzite so it appears as the fifth façade of the house particularly since it extends down almost to foundation level on the front of the house. The side facing the valley, in contrast, is almost entirely comprised of glass – 44 m wide. Next to stone and glass, oak wood is the third prominent building material used.

Oppdal quartzite is mined in Norway’s Oppdal region. One important attribute is that it can be easily split. The roof is covered in slabs from 1.5 cm to 3 cm thick and surface areas of 0.5 m² and more.

The stone was supplied by Minera of Norway.

Depending on the location of a building site, the weight of the roof is sometimes the least cause for concern, as is the case for the Capanna Cristallina (Cristallina mountain shelter) built at dizzying 2,570 m elevation in the Swiss Alps: the construction must be able to withstand the weight of 7 m of snow and winds of up to 200 km/h. So the 3 cm-thick stone-slab-roofing tiles posed no particular static problem.

Building a new shelter became necessary after its two precursors were literally torn to shreds by avalanches. The Swiss architect team Nicola Baserga and Christian Mozzetti won the tender with a building concept, not commonly seen in high mountain regions: they placed a type of cigar box on the summit. The ground floor is comprised of reinforced concrete set into bedrock to a large extent. The two floors above are comprised of rooms for mountain climbers and hikers and are made of pre-fab wooden elements.

As far as the construction material is concerned, the building is entirely conventional, except for the fact that the ground floor is merely clad in rock excavated from the foundation. The roof with stone tiles is typical for mountain shelters albeit that this one is not a gable roof but flat. As the trails jut out from the mountainside, the roof is the first to catch the eye of a tired wayfarer and is thus truly the fifth front.

On closer scrutiny, it becomes evident that the wooden stories are superimposed on the ground floor with a slight offset. This emphasises the entrance optically and protects it from weather. The terrace is paved in rock excavated from the foundation pit.

Around 2,000 helicopter loads of material were needed to supply the site.

Gothic cathedrals are generally overloaded with statuettes and decorative elements – how can a modern extension fit in the picture? In the case of Cologne’s famous cathedral, a new entrance to the towers including a souvenir shop was commissioned. Kaspar Kraemer architects decided on a radical contrast to the place of worship: the entrance is stringently right-angled all the way to the roof. The contrasting styles determine the appearance in other ways as well: whereas the cathedral strives toward heaven, the two annexes seem to humbly cower down before it.

Both the roof and the facades of the new section were covered in Herdecker Ruhr sandstone – the roof in slabs of 64 cm x 62 cm x 5 cm thick intersected by 3 cm wide raps to allow rainwater to run off via the slightly inclined flat concrete roof. The stone was provided by Grandi company, stonemasonry by Natursteinwerk Villmar.

The new entrance-building is also worth seeing from below as it leads through passages around the mighty cathedral foundation made of basalt and tuff.

An unusual discovery was made in the Japanese city of Oda in the Simane prefecture: a roof construction albeit not made of stone but rather of ceramic tiles dubbed „Kaidannoie“, or „Stairs House“.

Architect y+M design office expounds that it was at once the wish of the land-lord-couple to reserve a quiet private place but at the same time create a „warm and light“ welcome area for visitors and guests.

The stair-shaped roof has become a meeting place for visitors and an impromptu play-ground for children. The highest point of the building is a terrace. The slats in the steps are the main source of light.

The stair-shape directs the beholder’s view upwards, reducing the building in size optically according to the architects. The tile construction is at once low-maintenance and energy efficient: in winter when the sun is low, rays are directed into the house through the slats whereas in summer the light is directed away. A breeze easily ensues.