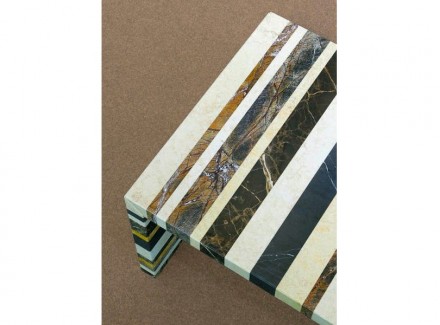 (October 2011) German based Daenert Company offers the best example. Manufacturers of exclusive furniture of the most recent presentation: „Barcode“ – including a table, have taken on the challenge. The new collection is proud to present its stripes which emulate barcodes found on most retail products today – with a difference: these aesthetically pleasing stripes originate from „from the production process“, i.e. from remnants as the manufacturer explains!

Note: it is not the aim to maximize returns on scrap. In fact the high quality of design material experience added value through the eco-friendly processing. The fact that a renowned high profile company the likes of Daenert profits of the recycling aspect shows just how valuable this feature is.

This is not breaking news – but the fact that longevity of material boils down to recycling qualities is.

This is mirrored in the PR campaign of the glass and aluminium industries where recycling is the only buzzword at this time. Other aspects are literally swept under the carpet.

The development is dangerous for the natural stone industry. The branch never expounded on recyclables – rather choosing to expose the longevity aspect of the material as such.

Let us turn to current examples for recycling of natural stone.

Next to Daenert’s „Barcode“ Belgian based Rotor Studios has a high profile example to present. Members of the Rotor Studios’ workforce were quick to seize the opportunity when marble siding slabs were on the University of Brussels were being demolished giving the stone new life in form of tables mounted on scrap metal frames complete with scrap wood seating.

Readers will recall that recycling stone pillars was already practiced in ancient times when Greek and Roman columns found their way to sites in the Northern latitudes at which cathedrals were being built.

The modern version of reclaiming natural stone treasures is being practiced by a number of companies specializing in stone floor tiles from castles. Cobblestones are generally reclaimed, albeit without reference to provenance.

One impressive example of sustainability can be seen in New York City’s Brooklyn Bridge Park, where wood reclaimed after demolition of warehouses was turned into park benches and granite from two bridges has morphed to steps along the river banks. „It is our aim to sustain history’s strata“ according to a video by the architects.

One non-profit recycling idea originates from the USA. Habitat for Humanity has established a ReStone where used stone countertops are distributed among those living on a tight budget.

An entirely new idea is presented on British based Stonelocator’s webpage since July of this year: here scrap stone can be posted for sale provided they measure at least 0.25 m². We were not able to find out if the concept actually works – our question remained unanswered.

In short: stone is a natural for recycling. Even small chips have a great longevity, at the end of their life-cycle as gravel or gabion constructions. The maxim in product development is: „waste is design gone wrong.“

The US and German Cash-for-Clunkers-program was the seed for a new thought: the program, which pays owners to scrap their old cars and purchase new ones might be transposed to the stone branch. Could producers of natural stone turn a recycling guarantee into advertisement for their product?

Conceivably a trade organization could help realize the idea by founding a self-financing company. Turnover could be attained twofold: first in recycling and selling the product itself and second by means of the initial purchase for which the customer would pay a deposit.

Would the idea catch on among consumers? Certainly „Lohas“ would jump on the band wagon. US Consumer scientist Paul Ray describes the group as consumers for whom Lifestyles of Health and Sustainability play a central role. Their motto: ‚shop to make the world better’. Paul Ray suspects that fully one third of consumers belong to this group.

And the trade organizations? We asked the European natural stone umbrella organization Euroroc whose secretary general Professor Gerd Merke told us: „particularly in the case of large building projects the idea of Cash-for-Clunkers is enticing. A great deal of reconnaissance work will have to be done before our members can grasp hold of the idea.“