Architecture: To be a bouquet of flowers would be the life 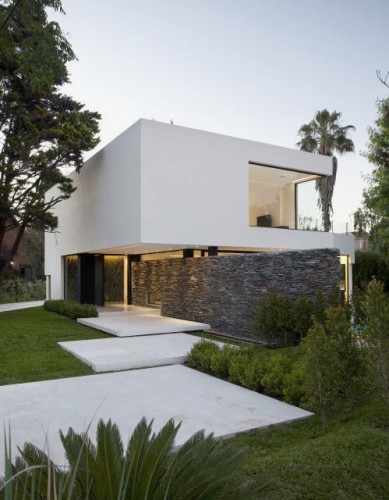 (October 2011) One would wish to be a bouquet of flowers or a designer sofa at the very least if not a resident of the house – that way one could live out the full extent of ones colours and design. In the „Casa Carrara“ („Carrara House“), in Pillar approx 50 km form the Argentinean capital Buenos Aires, white is the predominant – not to say the exclusive colour and right angles are the only shape. The house is entirely open though its large picture window and almost seems to blend into the backdrop.

Only the walls facing the street front are clearly marked off. But they continue along the ground giving them the appearance of orientation markers rather than walls: The entrance to the house is made of white marble surfaces ascending toward the entrance. Whereas stairs often seem cramped, these steps are wide open areas.

Only a few accents, mostly in stone, break the stringent form. That would be the wall to the entrance: raw stone masonry in San Louis stone gives the appearance of a dry-wall. The same holds true for the reverse side in the interior of the building.

Another accent makes its appearance when crossing the entrance. Here the wall opposite is clad in Ramigiatto Green marble again with raw surface.

Apart from these there is only one repeated very soft accent. This is the many turquoise water surfaces in the form of swimming pools and whirlpools strewn about the house.

600 m² spread over two floors is the surface area of the house. Andrés Remy Arquitectos „chose the stone and conceived its design jointly with the landlord“, according to speaker Diego Siddi. The landlord once discovered the green marble used for the entrance and it was love at first sight. Some 400 m² were needed to complete the floor.

That brings us to the last, invisible, almost inaudible, accent which can only be felt in form of a light breeze: it is the water cascade flowing down a glass wall from the second to the first and ground floor. The pump is concealed beneath the hallway of the second floor.

In total the water basins cover an area of 110 m² and encompasses 130 m³ in volume. The pumps for the other basins are situated in the building’s service core on the ground floor.

The polished marble flooring is specially treated to make it skid- and slip-resistant yet shiny. The stone was supplied by Ragolia Mármoles y Granitos who also completed the paving.

It is worth mentioning that the house and garden also have a very unusual panorama view.