Markets: A glance at furnishing and design magazines 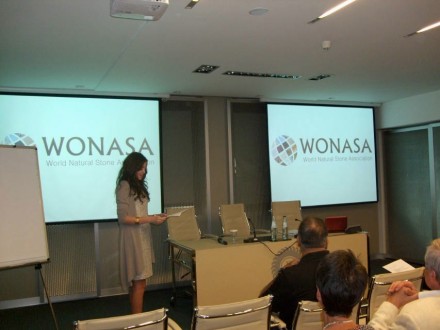 (November 2011) The World Natural Stone Association (Wonasa) is hoping to interest readers and open doors with the help of articles on the advantage of natural stone for furnishing and design. To this end Wonasa called a work-group into life prior to the Verona Marmomacc dedicated to creating a database on similar media. The remarkable attribute of the work-group is that all its members are women – mirroring the demography of readers, the majority of which are female.

Wonasa created itself one year ago in Verona and by now counts 37 members from 14 countries. The organization’s charter states that Wonasa’s main reason for being lies in the advancement of natural stone.

„Wonasa has decided to give the highest priority to sponsoring technical studies in prestigious institutions on aspects such as natural stone as an ecologically green product“ according to a press release. President of the organization, Veeramani, announced that the organization would undertake a self-financed analysis of natural stone as a building material for earthquake regions. Stone buildings resisted the devastation of the Kobe earthquake in 1995 better than buildings constructed in other materials.

The organisation’s logo was also decreed, the design of which was chosen among entries competing for a purse of 3,000 US-$. The organization’s webpage is underway soon to be accessible under http://www.wonasa.com.