Markets: India allows an increase in imports of raw blocks 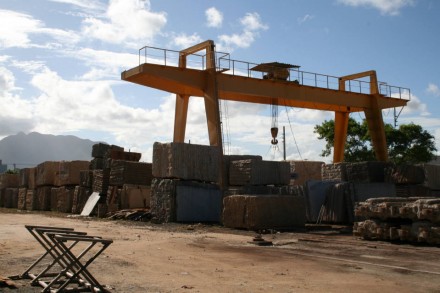 (November 2011) India recently experienced a governmental about-face – possibly a decisive step toward even better strategic positioning of the county on the international natural stone market: politicians have decided that in future one third more raw marble blocks may be imported to a maximum of 500,000 t within a calendar year.

There will also be an increase in licences for raw-block-importing companies.

With these figures in mind, India’s new quotas seem like nothing to write home about. But let us take a step back and look at the big picture. As can be learned by locals, the local producing industry has suffered considerably under unfair and restrictive laws favouring a handful of leading companies but hindering the small and mid-sized enterprises.

Here are the figures: apparently there is a total demand of 1,000,000 t of natural stone within the country every year. The local industry can mine but one third due to ecological and other restrictions even forcing some quarries to close completely.

Closing the gap through imports was hitherto impossible.

The growth hindrance is an issue often brought forth by the All India Granites & Stone Association who also pointed out how companies with importing licences are favoured. Not only do these few companies profit of higher turnover owing to availability of raw material. Some even sell part of their import quota underhand at inflationary prices.

Another aspect: if import of raw material is sharply curtailed, then it should at least be possible to import the value-added end product. This is happening, in fact, by means of imports mainly from China.

For some time now, the Indian website has been addressing the government’s conscience with convincing arguments. If the government fails to allow more imports, Indian companies would have to digress to mere sales-agents. They would purchase raw blocks abroad, have them finished in China and import the value added product or sell it elsewhere as needed.

With this strong argument, India has been pulled into the middle of global industrialization (with the exception of gravestones). Many a job would become redundant.