Markets: Setting the do’s and don’ts for the stone branch 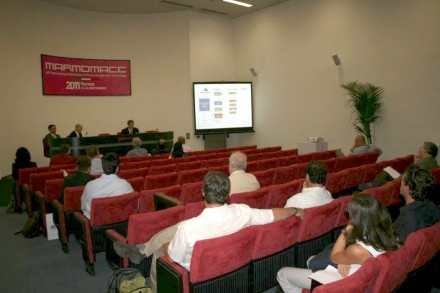 (December 2011) „Final call“, as heard at airports, was the resounding shout at the Marmomacc trade fair in September: in the USA standards for sustainability in production and processing of natural stone are being agreed and the initiators called for the national organisations and experts around the world to help financially or with contributing ideas.

The standards will be fixed for the US-market – an important customer even in times of world financial crisis. But contributions are also important for another reason: other countries will soon have to set down rules, too.

The Natural Stone Council responsible for US lobbying and spreading a green image for stone, the Marble Institute of America (MIA) and the trade fair organization Veronafiere were represented on the podium.

It is not the aim of the initiators to promote the ecological aspects of various stone types, „but rather to set down what standards need to be met to produce stone in a preferable manner“, according the starting-presentation at Marmomacc last year. In other words: it’s all about the do’s and don’ts for the production and processing of stone.

Formulating the standards began in October 2010. By now there are lists showing where along the production line sustainability is an issue: the use of energy and water are central aspects as are rules regarding labour protection or banning child labour.

„Whoever jumps on the bandwagon now can effectively influence the process“ according to Professor Jack Geibig, coordinator of the project around participants. The standards should be complete by the Q2/2012.

As regards the interest of the international stone producing community, Jack Geibig is reserved: „Cooperation was not overly popular.“

Thus the Marmomacc event showed once more that the branch is reluctant to cooperate internationally. Around 20 listeners were present. A representative from Europe remarked during the course of discussion that EUROROC is working on standards in the Environmental Product Declaration (EPD) where manifold cut-sets with US standards exist.

Yet: Also Europe’s experts have not come forth with their findings and did not actively participate in the US-Regulatory proceedings.

In our November 2010 edition we expounded on the standards and regulatory process in detail.