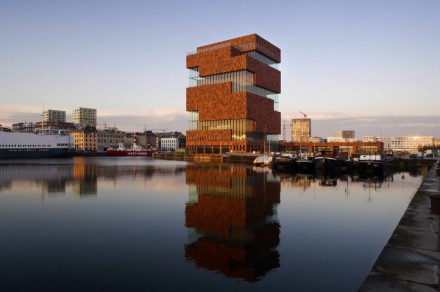 (December 2011) The building is one more in a series of upright shoeboxes, 62 m high and 40 x 40 m square surface. But in the case of the Museum aan de Strom (Riverside Museum) in the Belgian city of Antwerp, architects created a sensational landmark offering a fantastic view and embodying the goals and hopes of urban-planning.

Its red sandstone cladding notably lends a distinct, almost unbearable gravity to the structure. This first impression is, in fact, intended by Neutelings Riedijk Architects: the façade is meant to symbolize the city’s history, the museum’s theme being the obligation of today’s generation to carry the burden of history.

Recurrent window openings break up the quasi monolithic stone block. From the interior exhibition halls what with their lifeless objects of the past, one has a fantastic view over the here-and-now of the city as it stands today including the horizon the future beyond, so to speak.

The openness was reinforced by the Rotterdam architects: the 11th floor reveals a 90° surface rotation affording a spiral ascension on the way to the top. Each level presents a view toward a different point of the compass culminating in a panorama view from the top floor restaurant.

The architects put the city fathers’ ideology in scene giving the historic harbour district a new lease on life by turning it into an attractive habitat after years of neglect.

The sandstone for the façade and pavement was imported from India. On the interior of the building, stone was used for walls of the galleries as well as for their flooring and ceilings.

The stone came in four colours ranging from chocolate brown to dark red to lighter red and finally to orange. The assembly of the slabs was programmed by computer for colour coordination – subsequent mounting was a logistical masterpiece. After all, some 13,500 m² stone slabs went into the construction. The exterior cladding is comprised of 100 x 60 cm slabs 4 to 5 cm thick.

The stone was impregnated to protect it against the elements simultaneously intensifying the colours.

The glass, too, deserves special attention. It is not smooth as might be expected, but mounted in waves forming an S-curve when seen from above. This makes the material stable enough to make-do without window frames – another aspect of open construction. In the corners of the building, the window panes are 11 m high with 60 cm waves.

Another detail: each third stone has an aluminium hand mounted on its surface, a total of 3200 over the entire building. They are meant to attract sponsors. Donors can „give“ 1000 € in hand. The cost of construction was 56 million €, roughly 60% of which (i.e. 33,4 million €) went into the building alone.

The hands also make reference to Antwerp’s: as legend has it, a wicked giant once terrorized the city and extorted great sums until a fairy-tale hero cut of the giant’s hand and tossed it into the river.

„Antwerpse Handjes“ (Antwerp hands) are sold all over the city as a tourist attraction. We recommend the chocolate variety.

Stone was provided and mounted by Belgian Tile Centre, Loveld and Gillet. The bracing of the stone slabs was the work of German-based Halfen Company.