Stone Stories: Behind the facade 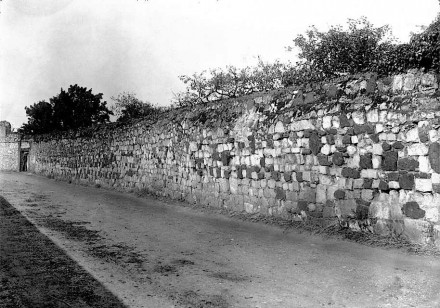 (December 2011) The English town of Dartford is home to the world’s possibly most expensive stone wall made of cheap material according to geologist and author David B. Wiliams as posted in his blog. It is a strange story going back to the 16th century, involving bad investment of enormous proportion and the image of alchemists in general:

It was in 1576 when Sir Martin Frobisher set sail for the New World – specifically Canada’s Northwest Passage – from whence he returned with a remarkable black stone. Somehow the stone made its way into the hands of one of the other members of the party whose wife, in turn, tossed it into the fire perhaps thinking it was a piece of coal.

In the heat of the fire, the stone began to develop a sparkling gold twinkle….

The excitement must have been boundless because the unknown material must have contained gold – at least according to the then commonly held belief: alchemists contended that the colour of matter was invariably an exact and infallible proof of the matter’s content. Thus: that which glitters golden, is – or must contain substantial portions of – gold.

The stone was submitted to detailed analysis. But there was no clear proof that the stone contained gold. Finally a Venetian expert was called upon. His conclusion: a resounding yes! The reason given in 1577 „Bisogna sapere adulare la natura” (It is necessary to know how to coax nature.) – strange by today’s scientific standards but a reflection of the contemporary philosophy of alchemy.

Practitioners of the science at the time believed that what we consider as dead matter today was actually the home to spirits who – sometimes – wished to remain undiscovered by man. So – it was believed – they concealed the presence of precious metals in mines and mineral samples.

Alchemists were convinced that this was a common occurrence. After all, ancient philosophers and scientists had reported at length on such phenomena. Ancient mineworkers, as legend would have it, discovered a silver-coloured metal, which alchemists heated, distilled and submitted to a variety of procedures – only to discover that the silver sheen would invariably disappear: sure proof that spirits were at work. „Nickel“ was the name given to the fabulous creature, a name which the metal in question carries to this very day.

Similarly, cobalt derives its name from the German Kobold or „Goblin“, as cobalt miners called the ore. Early attempts to derive copper or nickel from the ore simply yielded cobalt oxide with the undesired side-effect of emitting toxic and volatile arsenic oxide during the process.

But experienced alchemists, it was contended, were able to outsmart the spirits, as the Venetian expert certified.

Frobisher was quick to organize another expedition from Dartford to Canada. Over 1000 t of ore were retrieved and brought back safely to England.

An estimated 4 million British Pound Sterling (~ 4,67 million €, ~ 6,32 million US-$) by today’s standard were invested – yielding nothing but a mass of gneiss. Some of the stones were used to build the wall in 1579 as depicted in our photo.

Williams’ latest project is a book on cairns.