Architecture: Caucasian towers, a house of worship in India, a Spanish tannery and more 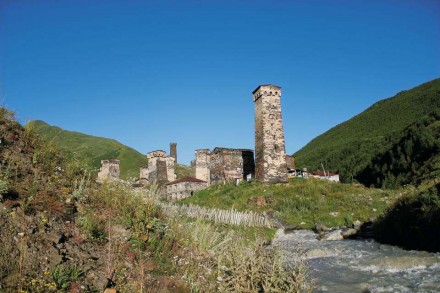 (December 2011) Whoever takes on the challenge of travelling upstream through the Inguri and Tskehenistkali valleys will be richly rewarded not only by the magnificent view of snow-covered peaks but will also see strange towns with high towers looking like chimneys from afar. On closer scrutiny observers will see that their surface area is square and that they are incorporated into farms.

The Svaneti-Towers of the Great Caucasus in Georgia were selected for this year’s bi-annual prize for Architecture in natural stone and are described in detail in the accompanying catalogue. Allow us to present the projects.

The Svaneti-Towers were erected between the 11th and 13th century and made of schist, easily split and used in chunks of 15 – 20 cm thickness.

The towers reach 4 – 5 stories in height and served as refuge from enemy attacks or from skirmishes between towns or feuding clans. The two-story farm houses annexed to the towers were left unprotected during times of crisis.

The original number of several hundred of these constructions was decimated over the centuries, leaving approx 150 intact to this day. A Unesco World Heritage Site since 1996 the catalogue states that more efforts are needed to protect the site. First photographs were taken by Italian Alpinists approx. 100 years ago.

Similar towers were erected around the same time elsewhere in Europe, e.g. in the Italian region of Tuscany where they also served military purposes as well as taking on representative functions for ruling families. But, unlike the Italian cities, the Caucasian towns are not fortified by a defensive wall. 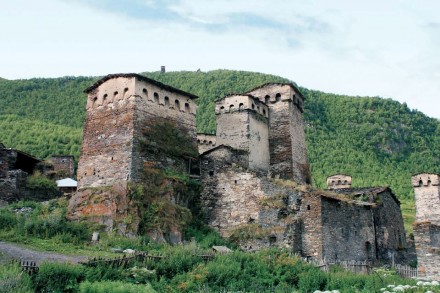 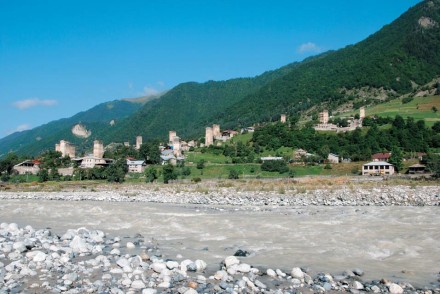 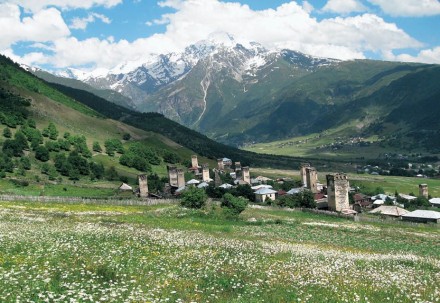 The Anávyssos House on the Greek coast near Athens is an unusual combination of old and new: old – the building material making up the wall, i.e. local granite, and the metaphor tying it to the antique Greek temple. New – the steel reinforced concrete roof weighing the building down optically. The building situated directly next to the road to the Temple of Poseidon at Cape Sounio and was built from 1962 to 1964 by the Greek architect Aris Konstantinidis.

The 50 cm-thick massive walls are joined by mortar. The flooring on the interior is paved in schist slabs.

Soon after completion the building it was subjected to sharp criticism. It was said to be „sunken“ in the landscape. Today it belongs to the villa complex of a shipping mogul and serves as a storeroom. The photos were taken by the architect himself shortly after completion.

Combining the traditional with the modern was a tricky business in the case of the Shiva-Temple in the town of Wadeshwar between Mumbai and Pune. Houses of God are subject to rigid building codes just as for the rituals around the church service.

Architect Sameep Padora took it upon himself to create a modern building while at the same time observing the existing rules.

So he transposed the usual square „Mandapa“ where worshipers come together for prayer to the outside. Worshipers now gather out in the open – surrounded not by walls as might be expected – but rather by trees.

Padora chose to keep to the second traditional element included in every Hindu temple, albeit with a twist: „Garbhagriba“ a darkened room with a pointed roof („Shikhara“)- home to the Gods in Padora’s draft still has a pointed roof. But he opened it up to let light fall in the interior. The entrance also was designed with hitherto unseen elements of surprise: a corner was ripped out of the stone wall and replaced by a box made of steel and wood.

The architect, by the way, worked pro bono as did the craftsmen. Local basalt was used. 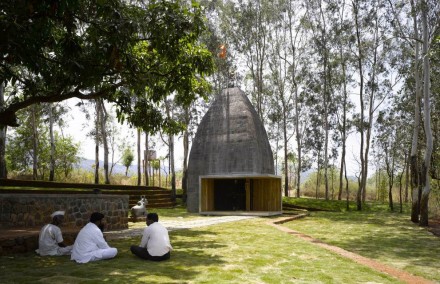 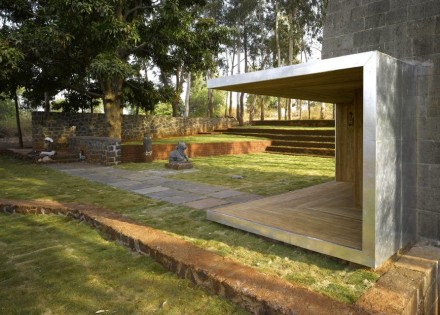 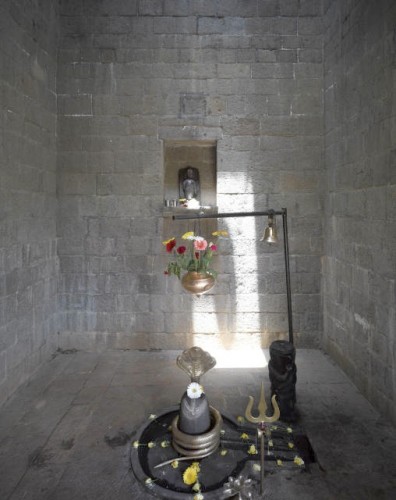 Spain is home to another award-winning project. It is the former Puente Sarela tannery close to Santiago de Compostela originally built in 1790. During the course of the centuries it became a proper factory and finally abandoned and all but forgotten. Now the complex received a new lease on life and was converted to a hotel complex under architect Victor López Cotelo of Spain.

The historic complex ascends the steps from the banks of the river: the actual tannery was built level with the river powered by the flow of water. Above it, the miller’s house. The building is intersected by the ancient Roman road to Finisterre along the Atlantic. Above it, the factory halls where the tanned skins were hung up to dry.

None of the buildings were demolished. The architect conserved the buildings’ basic structure carefully adapting them to their new use.

Use of material deserves special attention. Wherever a wall was taken down, the team of stonemasons worked the granite to ready it for new use on the spot. Only as a last resort if material could no longer fill the needs was new material bought.

The award-winning entries are presented in detail in English and Italian in the publication Glocal Stone (edited by Vincenzo Pavan, Arsenale Editrice, ISBN 978-88-7743-360-2).

See also: our reports on the other award-winning contributions:

Standardarchitecture, Beijing: River Terminal and Visitor Centre, Tibet, China. The before bright colouring of the walls has been painted white in the meantime. According to the catalogue (p 65): „In this way the typical color of Tibetian spirituality was recalled, as in the Potala Palace, while avoiding strong colors from coming into conflict with panoramic views and distracting visitors.”