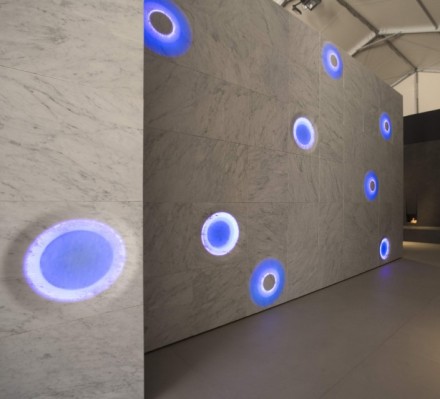 (January 2012) Did aliens pay us a secret visit after all?

When „Bolla“ (bubble) lights seemingly stared you down like an evil eye from another planet one might think that aliens were at work: at the Cersaie fair circular surfaces looked back at visitors from the marble wall with a dark iris and peripheral light source – colour and light intensity vary seemingly at will.

But don’t panic: it wasn’t the work of aliens. „Bolla“ is a co-production of Italian Incontroardito and designers Domenico de Palo. A sheet of glass is sandwiched between two slabs of marble. Circular cut-outs and relief surfaces form concave and convex eyes respectively framed in LED-lights illuminating the surfaces.

LED is not a distant star but the acronym for light emitting diode: small semiconductors that shine while consuming far less power than other types of light. Another highlight of these tiny light units is that they can be programmed to emit a variety of different colours of light. In the case of „Bolla“ the LEDs are individually programmable allowing interesting effects.

The installation can be used in a wide variety of ways – not just for wall lighting. A table was already developed for example. Natural stone facades could also be illuminated and produce delightful cinematographic effects. 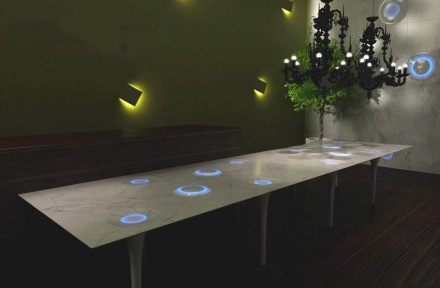 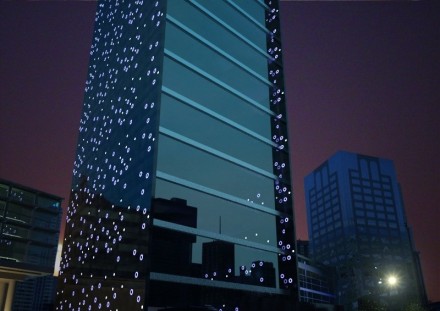