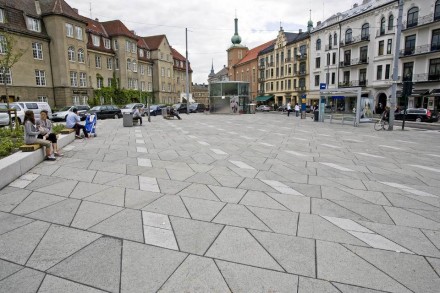 (January 2012) Public spaces with uniform floor slabs are just as boring as asphalt pavement. But wait!… Help is at hand: geometric shapes offer a sheer endless variety of possibilities such as the trapezoid recently implemented in Oslo’s Knud Knudsens Plass (Knud Knudsens Place). The result is a vibrant, lively space perhaps owing to the fact that what seems like chaos at first glance actually mirrors the road map in immediate proximity according to planers Grindaker Landskapsarkitekter.

The place was formerly a dead-end triangle at the end of two streets covered in asphalt and serving as a parking lot for taxis. Architects banned cars to the outer curb and paved the place in cobblestones and greenery giving it new lease on life. Lines in light stone lead to a nearby park unhidden by the removal of surrounding hedges.

Dark basalt and light granite were used. The contrast of the two is particularly apparent in rainy weather. Stone was provided by Jogra, paving by Steen & Lund.

The place was named after the Norwegian linguist Knud Knudsen who played an significant role in the development of the Riksmål and Bokmål form of the written Norwegian language. 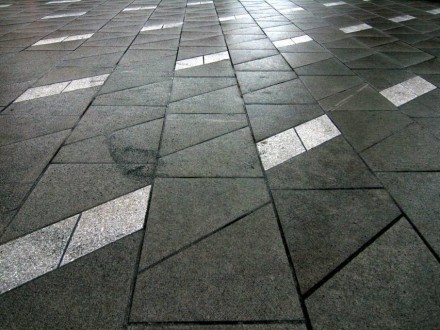 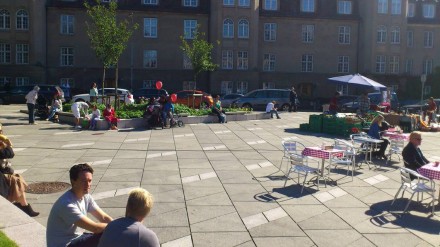 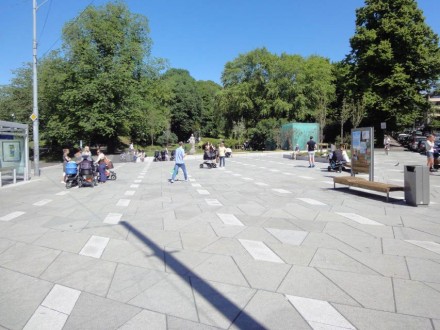 About 150 m from the banks of Thames in London’s Westminster district the river could literally observe its own path through the city. For this is where a model of its watercourse with all its meanders and estuaries is mapped in black granite. The installation by the name of Grosvenor Waterside is situated next to the Grosvenor Canal, long neglected and eventually run down. Today the roughly triangular area is lined in high-class apartments and condominium complexes. 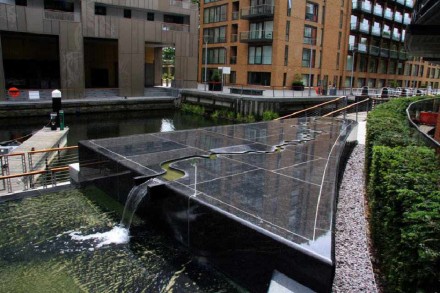 Grosvenor Waterside was designed by the German-born artist and stone mason Ekkehard Altenburger. Water was the central theme for the project. Altenburger created the watercourse model and installed a „Mirrorpool“ at its end, in which the surrounding buildings are reflected. As a special effect, the water is held in constant motion repeating the river’s particularities.

A 40,000 l subterranean rainwater tank filled with the runoff from surrounding rooftops is the source of the installation. The tank is situated below a two-story underground garage, the roof: Altenburger’s impressive „Mirrorpool“.

Water cascades down a series of steps, with a mild, straight slope along the edge of the pool and circular cut-out at the centre of the pool serving as a run-off. The water film is a mere 12 mm deep constantly dropping off the edge of the 55 m stone edge – a lot of water all in all.

Stone masonry had to be realized with utmost precision. Surfaces are polished and sandblasted respectively. The edges over which the water runs off, were rounded by hand and polished. Angola Black Granite was used and stone masonry carried out by Szerelmey Company „under direction of the great John Guest“, according to Altenburger. Sheppard Robson Architects and St. James Homes provided support in planning. 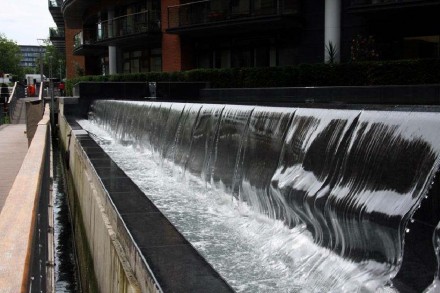 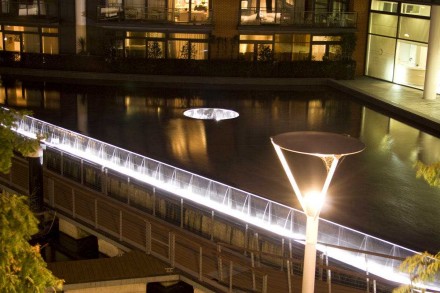 During the Great Fire of London in September of 1666 the city literally lived through the Apocalypse. 70,000 – 80,000 citizens’ homes were destroyed and even St. Paul’s Cathedral burnt down. After the flames and the heat died down, citizens tore down the remaining ruins of the medieval house of prayer and rebuilt it. A hint of the original building can now be seen on the place south of today’s Cathedral where parts of the foundation were reconstructed and serve as an enclosure for the part of the lawn.

Stone masonry was realized by Stonewest using various types of Purbeck limestone – the very same material to be found in the actual foundation of the old church 1 m below. Special notice should be taken of the stone inlay work around the lawn where the entire floor plan of the new and old houses of worship are integrated into the green.

Sandstone long defined the history of Ballast Point, situated on the Birch Grove Peninsula on the way to Sydney’s harbour. It was the first stop for ships on their way back from Australia to Europe where ballast was loaded on board. Later Oil producing companies set up their tanks at the foot of the quarry. It is now home to Ballast Point Park aimed at sustaining awareness of the various phases which history bestowed on the area while providing a grand view of the harbour and the famous Harbour Bridge.

The new terraces are literally making history: Gabions serving as supporting walls are filled with rubble from the old industrial complexes – not only stone and concrete but also metal was filled into the cages – a fact worth mentioning, as some of the metal shines uncorroded and seemingly lights up under the setting sun.

Another highlight is Tank 101 and some of the round lawn surfaces reminiscent of the old tank ground surfaces. One attraction is the work of artist Robyn Backen entitled „Balance and Ballast“.

Unfortunately we were unable to get permission to publish photos which can, however be viewed on a webpage.