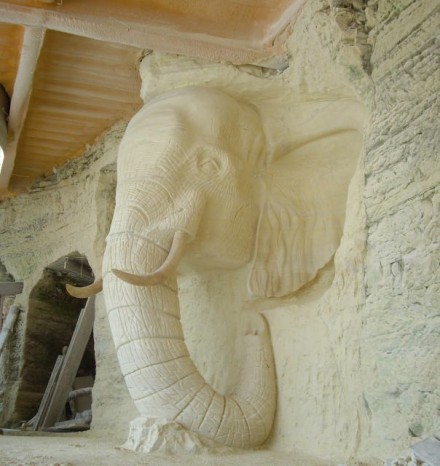 (January 2012) „Maybe I’m a bit of an artist“, says Oliver Hurst pressed for an explanation „but actually the elephant was in the rock all along“. He is a British stonemason and worked a spur to an elephant emerging from the rock 5,5 m tall freehand and without a concept or any research as to texture of the elephant’s skin. „I googled and it soon became clear how I had to go about it.“

But the project has a history.

A limestone cliff in the county of Yorkshire was home to an ancient mill propelled by a stream running along the cliffs foot. The cliff formed the back wall of the mill. The four-story building found a – shall we say: eccentric – new owner a few years ago who fell in love with the old building and invested a lot of money and time in modernising it.

During the course of refurbishment the stone wall in the newly created swimming pool room was supposed to be smoothed and straightened, when the mill’s owner suddenly stopped the work; the mighty spur, which should have been levelled, reminded him of an elephant. He decided that the mill should be it’s permanent home.

And that’s how things remained for some time. There was, after all, no-one available to coax the elephant out of it’s hiding place in the rock. 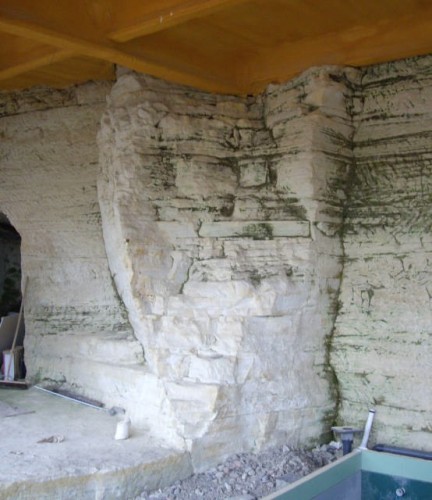 Citizens of Yorkshire began to talk and finally stonemason Oliver Hurst was at the centre of discussions. He drew a few lines on the spur („Later the concept was changed completely“, recounts Hurst) and that was enough for the landlord. After all, Hurst also saw the elephant hidden in the rock. 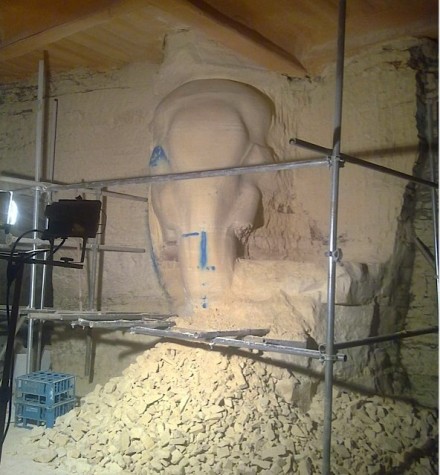 And so the artist began his work. The main challenge was not the details of the shape, as one might think, but rather working the stone on site in its natural state. „Extremely hard layers lay side by side very soft, porous strata“, says Hurst, „I had to take great care with every blow of the hammer.“

The work took 12 months to complete during the course of which Hurst says „I often considered how to patch small glitches with resin in case of an accident“, he admits. But: „all went well.“

Unfortunately the landlord passed away in the meantime. The family gave the go-ahead to complete the project – not least as a sign of respect for the deceased. But the baby elephant, which the artist also saw in the rock, was not realized.

Hurst had a plaque mounted: „Vir Magnus in Memoriam“ it reads, or translated: „in memory of a great man“ signed by Hurst in sandstone. The tusks are made of fibreglass. 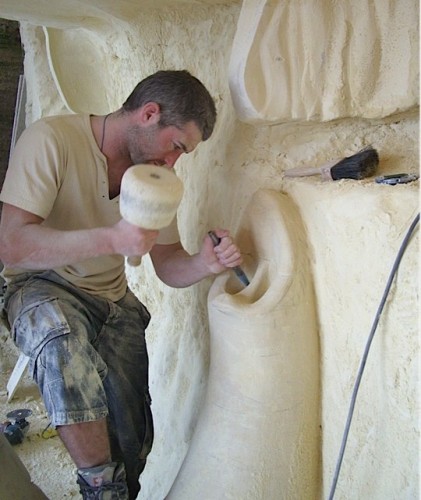 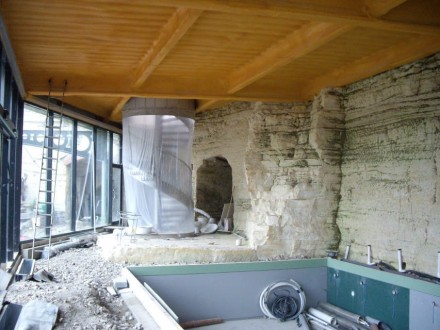