Architecture: Mysticism in houses of worship 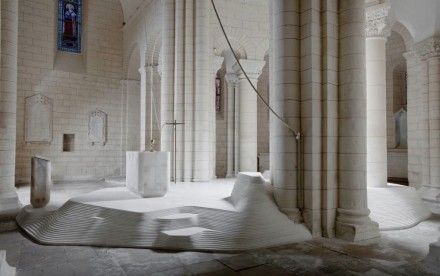 (January 2012) Melle in the French Département Deux-Sèvres can boast a possibly unique altar-room. Architect Mathieu Lehanneur raised the altar and pulpit by placing them on a free-standing marble plateau into which the baptismal font is indented.

His aim was to achieve a mystical air: the slab should convey the impression of having preceded the church building as if it had been there all along, from the beginning of time like faith itself. On the other hand the plateau is meant to „reflect the extreme care paid to the telluric energy of stones and territories in the building of Romanesque churches“ according to a press release. 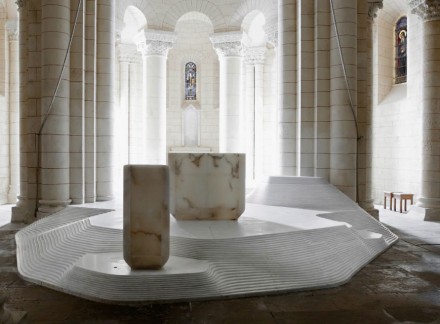 The surface of the podium measures 32 m². The marble slab is 15 mm thick and approx. 50 cm wide where it meets a concrete core to which it is fused.

It was important to avoid contact of the podium with pillars or the church walls thus facilitating Unesco’s approval of the interior design: the church is, after all, one of Unesco’s sites of World Cultural Heritage; the choir, in which the podium was set up, was first constructed in 1090 a.D.

The baptismal font is most unusual for a Christian church – the pool is sunk below floor level. 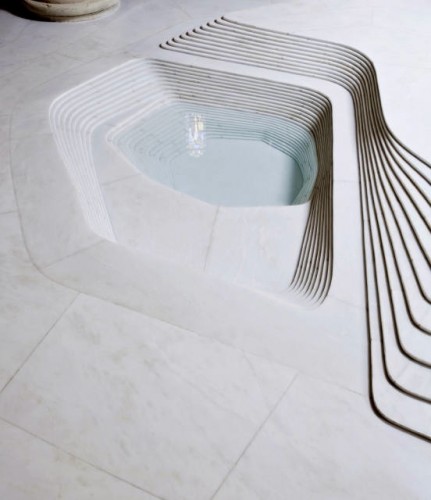 The marble implemented was of Namibian origin and was sawed in Carrara. Finishing was carried out by the French Brocatelle Company of Lyon. Two more stone types make their mark in the house of God: coloured alabaster for the altar and pulpit, and limestone for the historic walls.

Many a discussion ensued ranging from criticism to pragmatic considerations such as concern that the priest or acolyte could stumble and fall into the font, or that the preacher could take on the appearance of Obi-Wan Kenobi straight out of the Star Wars movie on the floating pulpit. 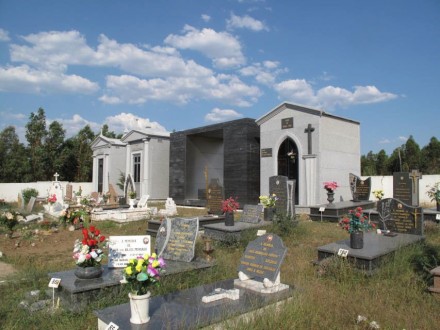 Mausolea are generally small buildings recounting the wealth and importance of the family and clan whose final resting place they are meant be and distinguishing it from surrounding tombs. But Portuguese architect Pedro Dias decided to break with tradition when designing the family tomb in Serra do Açor as an open cube inviting mourners, friends and family to step inside during the ceremony and thereafter. The architect verbalises his concept as a „Sepulchral Void“ meaning that the open construction is meant to bring the absence of the deceased to the foreground and make it tangible. 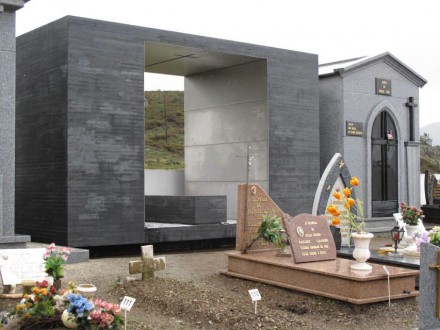 A bench in the middle of the cube plays a central role: during the funeral ceremony it serves as a pedestal for the coffin, later as a place to rest and reflect on the deceased. The passage from life to afterlife is symbolised by the open view over the landscape on the one hand and by the contrasting material used for the inside and outside of the cube on the other. The exterior is made of black granite stripes whereas the interior is clad in broad stainless steel plates.

The tomb is prefabricated in the factory and placed on site by crane. The walls are filled with concrete after they are positioned. The tomb provides place for 8 family members. 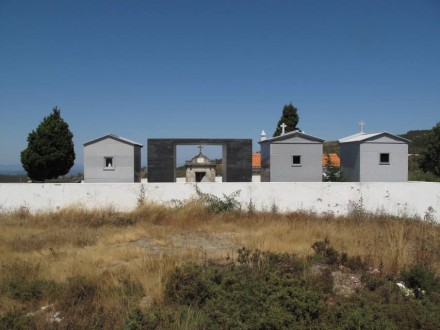 Grey sandstone from the Italian Apennin mountain range is the dominant material used in Israel’s Domus Galilaeae. The stone was provided by Ill Casone Company and was used for interior flooring and wall cladding. By using just a few sizes of stone slabs the installation emanates an aura of peacefulness where visitors are able to concentrate on the essentials, according to a description.

Contemplation is the core of the Catholic Domus Galilaeae in the Holy Land. It is meant to allow aspiring priests to experience the magic of faith before they are ordained. The complex was constructed above the Sea of Galilee where Jesus performed the miraculous multiplication of bread and fish for his followers, precisely on the peak of Mount of Beatitutes, where Jesus is said to have delivered the Sermon on the Mount. The figures around the circular chapel show Christ with his Apostles.