Alfredo Polti: Open-air-showroom on the facade 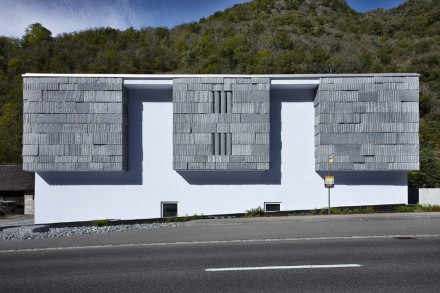 „In Cava“ (In the Quarry) is the unusual name given to this building – with a history: when stone producer Giovanni Polti inspected his Calanca-gneiss-extraction with architect José Stefanini of JS Studio the tour passed by the quarry refuse. The architect exclaimed „These are exactly the pieces I’ve been looking for“. 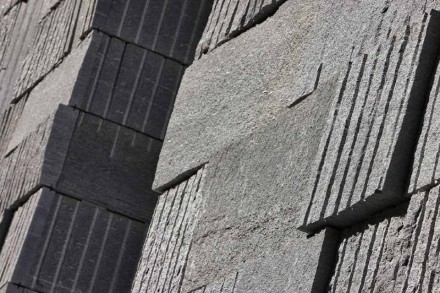 The aim of the perambulation through the quarry was to find the design for a new building of the stone company in Roveredo in the Italian part of Swizerland. The architecture should tell visitors much about the material just in passing: that it is mined in big chunk broken out of the bedrock, that much energy is needed to work a piece of the stone, what can be done with it…

So the facade along the main road contains three big chunks of raw stone in the upper two stories. Width and breadth were conceived to reflect the dimension of the raw blocks. 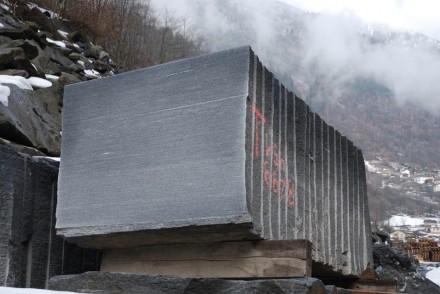 Alfredo Polti Company has three storage rooms on the ground floor. On the first floor three offices are open to business and above them thee apartments were built. The blocks jutting out of the facade make the ground surface of the offices and apartments 1.2 m² larger. Two windows are integrated in the „block“ in the middle.

This type of facade cladding posed a number of challenges. The stone chunks, after all, weigh 40 t (the biggest slab measures 200 cm x 76.7 cm and are 18 cm thick – that’s about 450 kg). The architect developed special anchors whereby the steel for the bracing itself already weighs 4.5 t.

But because thick blocks of stone often give the impression of huge monolithic monsters, the slabs were arranged to support the impression of movement and chaos. A special challenge was posed by rainwater runoff in case of strong rainfall.

So much for the presentation of gneiss in form of raw blocks in this open-air showroom.

All around the building examples of the worked stone can be seen e.g. sawed in the window frames. One side of the building has a 3.2 m high sample surface with 12 types of surface treatment.

And finally, all around the building stone plates and chips can be seen.

In the interior honed gneiss was used for the floor. 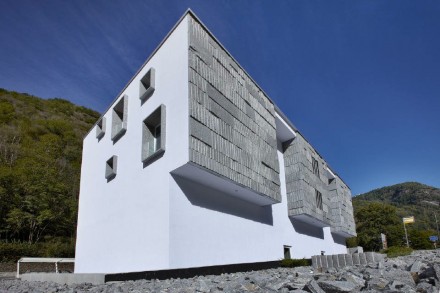 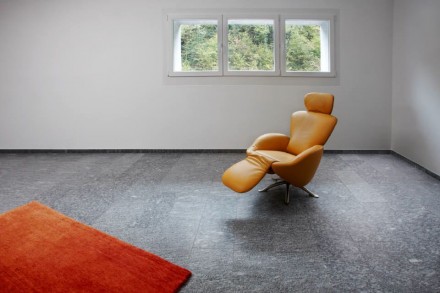 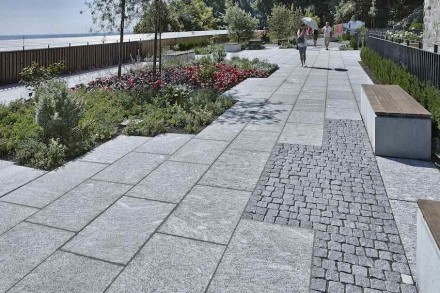 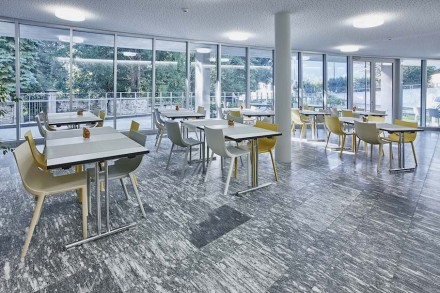 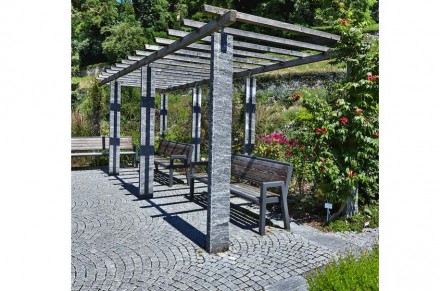