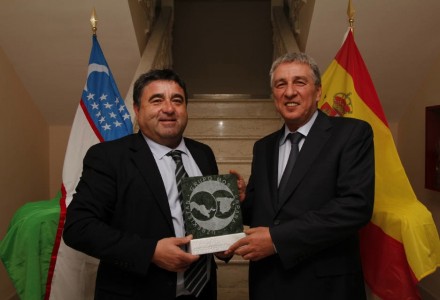 (April 2012) Spanish-based Marble Ortega Stone (Grupo MOS) welcomed visitors from Uzbekistan in February. The Asian delegation, whose journey took its members from near the Caspian Sea all the way to Spain, included prominent guests such as the Building Minister Erkin Akramov. The long-term aim of the visit was to set up a modern stone industry and the delegation’s hopes were to win over the hosts to realize the project. In return Marble Ortega Stone hopes to be granted access to this interesting market, as said in a press release.

The Cooperation is to be rolled out in a series of steps. 11 Uzbek guests are expected to take on fellowships at the Escuela del Mármol de Andalucía (Andalusia School of Marble) to attain qualification in quarrying and processing of stone. In a second step a model quarry is to be opened in Uzbekistan and will subsequently begin processing stone. Value added revenue is expected to remain local.

What with about 500 jobs and a great deal more indirect employment, Uzbekistan is counting on considerable positive synergy: The aim is to found a School of Marble locally in the long run.

Marble Ortega Stone, on the other hand, is setting up a showroom for products due to open in a few months. Grupo MOS is the fusion of a number of Spanish companies established in the 1990’s. The group is internationally active in Asia since more than 15 years now under the name „Shanghai Antonio Stone“.

The costs of the project are to be shouldered by the Ministry of Building and Education to 90% and by company groups 10%. The School of Marble is also one of the sponsors in its function as an institution of the province of Andalusia.

The cooperation was the fruit of a friendship between Antonio Ortega Pérez, founder and President of Grupo MOS, and D. Bakhier Irmatov, Consultant for foreign and commercial interests at the Uzbek Embassy in Madrid.

Internet sources speak of vast natural stone resources in the country. 20 marble occurrences are known to be of interest to the industry as well as 15 granite and gabbro sites. Basalt, too is present in large quantities. Stone quarrying has a long tradition in Uzbekistan, however the branch is not up to standard technically.