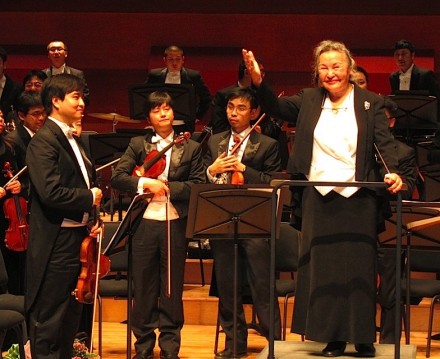 (April 2012) A grand opening celebration was in store for visitors to the Xiamen Trade Fair: The Xiamen Philharmonic Orchestra performed for them with Zheng Xiaoying conducting. Born in 1929, she lived through all the major upheavals her country has seen in the last century and even won a battle against cancer. She single-handedly founded the orchestra financed privately in the musical province and led it to international fame.

The guests expressed their gratitude and glee with standing ovations for the music written by Chinese and Western composers. 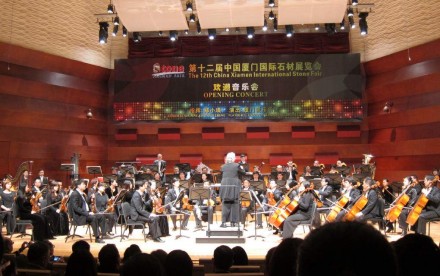 The trade fair also had an extra service in stock for exhibitors. For the first time the fair incorporated a „New Product Launch” into the program where enterprises could show what their branch had to offer. Those interviewed were very pleased even if the 10 – 20 visitors were no number to write home about.

The fair also held a congress in store for the third time under the motto „Stone Designer Forum“. Some 50 listeners followed the talks attentively: Ernesto Ghenzi, Swiss sculptor spoke out against mass production and emphasised the value of the artistic element. Jeffrey Matthews, International Dimension Stone Consultant from the USA warned of a trend toward cheap products. Katsunori Ogawa, Design Director of NTT Facilities, presented architecture from Japan. Shahina Waheed of the UN-Organisation UNIDO presented a project from Pakistan in which women are escorted to financial independence through mosaic-design and Peter Becker of Stone-Ideas.com demonstrated what household products made of stone could look like.

Strangely: the English language web-page still showed the themes and photos of speakers from two years prior.

The trade fair took place for the 11th time and could register unbroken growth. The fair is now the central stone fair for the Asian and Pacific markets. 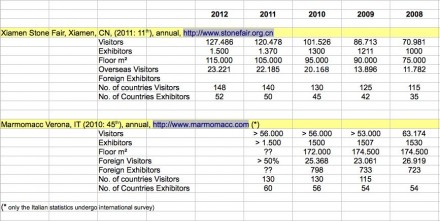 Presently a giant hall is under construction next to the main building and will provide additional 30,000 m² of exhibition space totalling 154,000 m² for the fair next year. The hall is reserved for foreign exhibitors according to the fair’s Marsha Tsai. 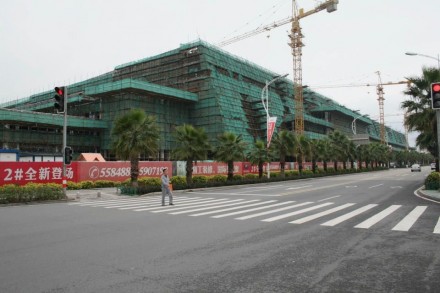 As far as the range of products is concerned, goods exhibited from March 6th to 9th in Xiamen seem to indicate a trend toward thin stone. We heard of façade plates ordered in thicknesses of 17 mm instead of the usual 20 mm. On the other hand there were conspicuously numerous exhibitors showing porcelain stone: 3 mm marble laminated on 7 mm ceramic.

This presumably reflects Chinese Government policy which expounded „green“ production as the aim in the ongoing 5-year-plan. The manufacturers, for their part, are quick to point out the ecological advantages like making less use of the natural resources. Also porcelain stone is cheaper than its massive counterpart for tiles.

But the actual ecological foot print is difficult to determine and questionable. What is saved in quarried stone is juxtaposed to an increase in energy consumption for ceramic production which requires high temperatures.

The picture would be positive, on the other hand, if waste products from the production could be used, e.g. slurry from the saw mills. We heard of such material in the fore math to the fair but nothing was to be seen at the stands.

Many more exhibitors were presenting their own production in design ideas than in years past – not mere copies of known products from the West. Here, as for porcelain stone the trend seems to be toward China going its own way.