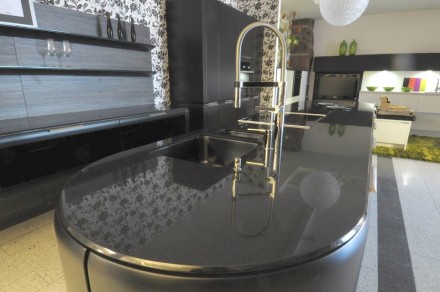 (April 2012) Bold design ideas were the mark of distinction at the Austrian Stone Masons’ Gild competition. We show some examples. Others will follow in later editions. The competition took place under the auspices of the Hallein Stone Centre. 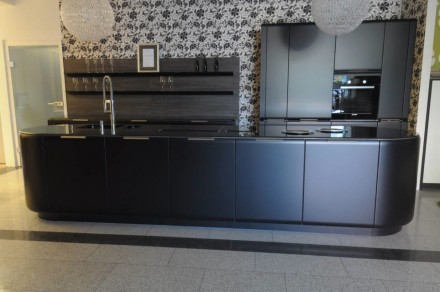 „Black is Back“ is the revealing name of a kitchen cooking area. The work area is 400 x 94 cm and made of polished Nero Assoluto granite. The doors and front panels are made of wood and plastic and treated with a special mat finished enamel coating, behind which the under-the-counter storage area is concealed. The varying surface finishes liven up the big picture and make this mammoth cooking area appear almost minuscule.

Project realization was the work of stonemason master Franz Reinisch based in Hainsdorf. The company was founded in 1985 and counts no less than 10 branch establishments with a staff of up to 50 in the peak season. The company’s standard of quality is very high and the entire team enjoys taking on unseal challenges. In the case in point the challenge was to conceal the mortise at the edge of the countertop – it is invisible.

The piece was commissioned by a kitchen construction entrepreneur with a foible for innovative design, a trait no-longer restricted to cosmopolitan areas: „Black is Back“ was installed in Feldbach, a small town in Styria, south-east Austria with a population of approx. 4,500. The kitchen took one of the competition’s prizes. 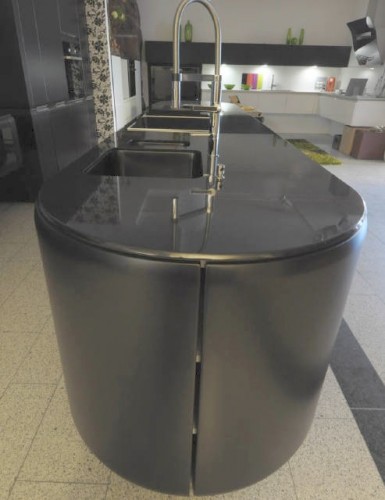 The submission „Die massive Arbeitsplatte“ (Massive Cooking Area) by the same enterprise went without a prize but the piece is unique in more ways than one: the Grigio Glox granite used is 10 cm thick and measures 223 x 77 cm. That sums up to a mass of 430 kg not counting the ceramic cooking field. Transportation of such heavy-weights is „no problem“ as daughter Christa Reinisch told us. However 6 craftsmen are needed to transport the piece from the flat-bed-trailer to its final site. The corpus on which it rests, requires only reinforced edges. 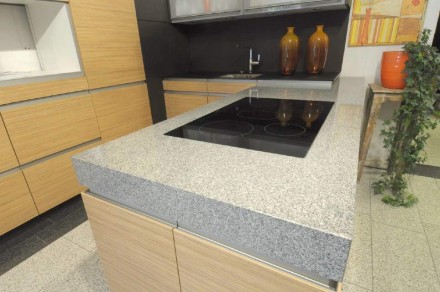 Massive construction was chosen in order to lend an impression of weight to the small cooking area. Another trick was used as well: the work surface with wall sink was set on the stone plate. 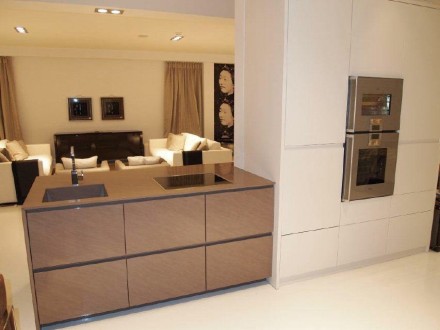 In comparison „Quartzite Brown“, kitchen by stone mason master craftsman Franz Reich is inconspicuous. The unusual thing about it, is that its function as a kitchen is concealed: if it were not for the sink and the cooking field, one would assume it to be a sideboard or chest of drawers leaning against a pillar in the room. The project took one of the prizes.

„I enjoy creating illusions, making things look different than expected“ says Franz Reich speaking about his design. His clients value his ability to transform a vague idea into a unique design object. 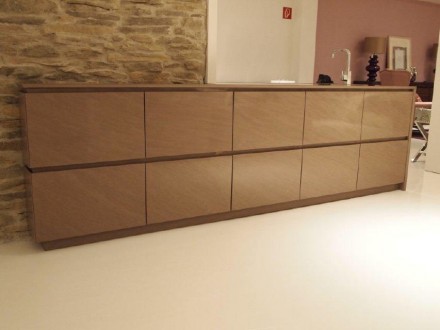 In the case of „Quartzite Brown“ Reich wanted to create an impression of calm, a mission accomplished through the large one-piece work-area (280 x 130 cm on the long side) and the drawer fronts. This also brings out the structure of the stone.

The impression of calm is reinforced by sleek drawer fronts devoid of knobs or handles. They open when light pressure is applied kicking off a small motor. But what if one of the motors gives up? Ask the stone mason: the back of the drawer fronts are cut at a slant so there is room to grip and pull the drawer open manually.

Steinreich was established in 1886 by the family’s now grandfather. Franz Reich has specialized in high standard interior design and construction. „Creativity is my passion“. The company counts a staff of 10 and, if the need arises, cooperates with partners to realize a project. 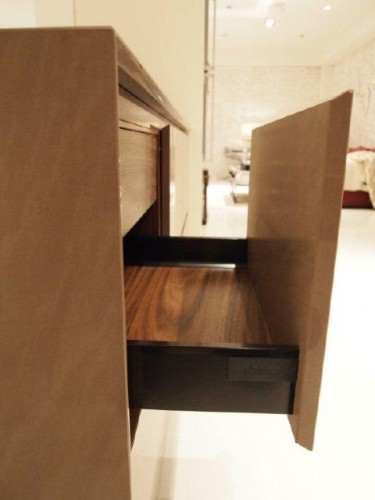 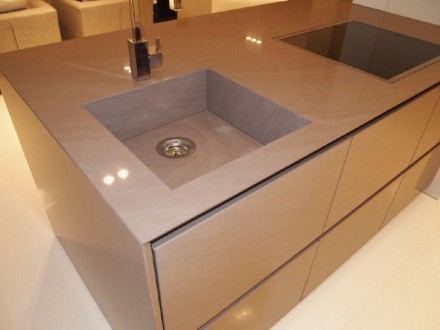