Architecture: Bringing the canyon to the hotel 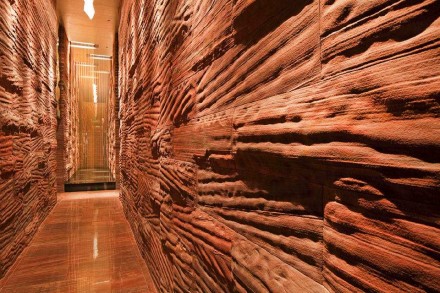 (May 2012) A project such as this one requires courage… a lot of courage. If it doesn’t turn out, it will be the laughing stock of the world of interior designers. The wellness floor of Las Vegas’ Cosmopolitan Hotel is supposed to give visitors the impression of a wild canyon landscape. The project seems to have turned out well, though – at least according to photos and information by various sources.

Design and drafts were by United/Klai Juba Architects. Las Vegas Rock Company realized the project. The project was awarded one of the Marble Institute of America (MIA) Pinnacle Awards 2011.

To purists: let it be known that the Cosmopolitan Hotel is situated right on the famous Strip where show and staging is the order of the day. A new dream-landscape was created complete with monsoon rain, the thunder of water falls, silver veins in the ceiling and floor and fog as well as quiet-rooms. 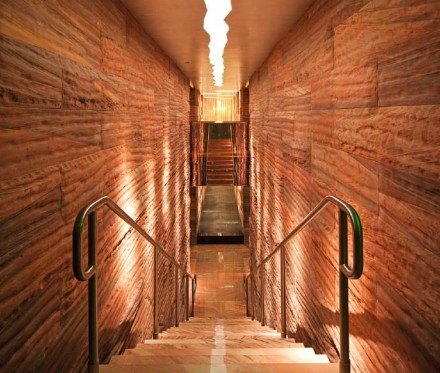 Sahra Spa and Hammam is the official title of the 14th floor wellness area. Next to saunas, steam rooms, cool mist rooms, massages and everything belonging to state of the art personal care, a Turkish bath is also integrated. More on the subject later.

A brown quartzite is the material of choice stemming from the Rainbow Quarries about 50 km south of Las Vegas. Its appearance is that of sandstone as in many canyons but with the density of quartzite making is amenable to innovative surface treatment.

Las Vegas Rock called its treatment „windswept“. In a real-life canyon gorge the walls are worked by punishing winds hurling sand particles at the walls and finishing the work started by the water’s erosion. The shapes which ensue are flowing interrupted by jutting elements or recessions. 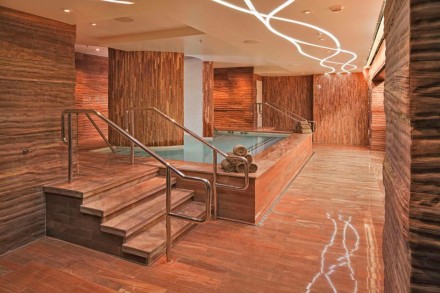 And just as nature puts a lot of effort into creating such gorges, the time and effort which went into the creation of the spa was enormous. Stone blocks were chosen by colour, specialists worked the stone to the desired wall cladding pieces allowing the chasms to be worked from the stone. For this to be possible, very hard, dense stone was needed.

The stone as the designer wanted it undulates from 2”-6” and the weight of these particular panels is 35lbs per sq/ft. That in turn made it an application where mechanical fastening was required.

The desired wall surface was computer simulated. Then the stones were worked with hammer and chisel by hand and finally sand-blasted. „It was very time consuming, but made quite a spectacular representation of a canyon“, according to Justin Lindblad of Las Vegas Rock, whose enthusiasm for the project is evident.

Tht stone was impermeated by impregnation throughout the thickness of the stone.

Other rooms have quartzite flooring – skid-free – one of the particularities of the stone. The walls are covered in thin ashlars layered and laminated. The architects even used gravel as a wall cladding. 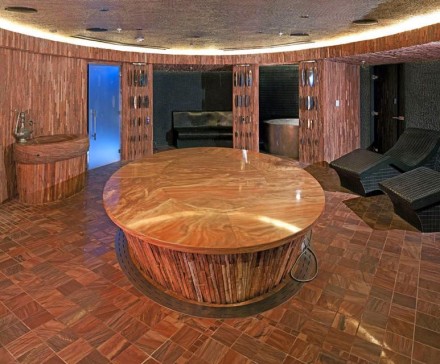 Just a few more comments on the Cosmopolitan Las Vegas: The chain invested 3.9 billion US $ in the twin towers in which some 3000 rooms are integrated. The construction has the dimension of a small city with several restaurants, theatres, casinos and congress centres. It was the only hotel to open its doors to the public in Las Vegas in 2010.

Pinnacle Awards are given by the Marble Institute of America (MIA) for unusual stone projects. Only MIA-members were eligible to participate in the competition. But as many MIA members are located outside the US entries may come from all over the world.