„We’re alive and that’s what counts!“ 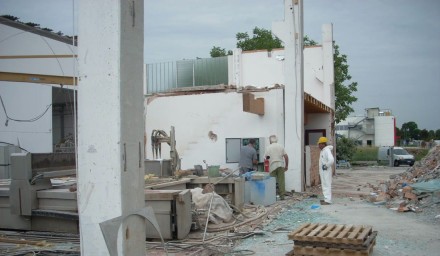 (August 2012) We have long been collecting material for a report on Italian-based Budri Company, one of the most creative in the stone branch. We wanted to write, e.g., about its collection with a tongue-in-cheek-name of „budri woogie“: a working model of CEO Gian Marco Budri’s, his wife Alessandra Malagoli’s and the team of associated designers’, architects’ and artists’ typical humor.

Budri is internationally active in the High-End production of exclusive natural stone interior design. But their work is hardly ever exposed to publicity, their contractors preferring privacy and non-disclosure.

But now other themes overshadow the daily work: Budri Company fell victim to the May 29th earthquake which destroyed large parts of the Mirandola production site. According to official reports there were at least 16 deaths in the Modena region attributed directly to the earthquake. 14,000 lost their homes. The region was not classified as a geological risk area.

Luckily no-one at Budri Company was hurt but the damage to buildings and machinery figures at some 6 million €.

By now the company has resumed production, albeit not in Mirandola – were the office headquarters and show-rooms are situated – but rather in the Cavaion Veronese subsidiary north of Verona.

The simple reason is that there were no alternate sites available after the May 29th disaster.

A mere month after the earthquake, on June 29th, the new production site went into operation accompanied by food and drink and in the presence of friends and business partners. „We’re alive and that’s what counts!“ was the heading on the invitation.

Special mention is due to the logistic magnum opus behind the quick new start which started with the search for a new location moving on to the transfer and replacement of machinery and ended in the challenge of getting the staff to commute the distance.

At the opening the couple thanked all for the „numerous messages of solidarity“ coming from all over the world.

And in the invitation the typical joy of living and up-beat mood of the enterprise came through – that which we meant to write about: „We’re alive and that’s what counts!“

The office headquarters and showrooms will remain in Mirandola despite difficult conditions. The production will return as soon as possible „but surely not before 2014“. 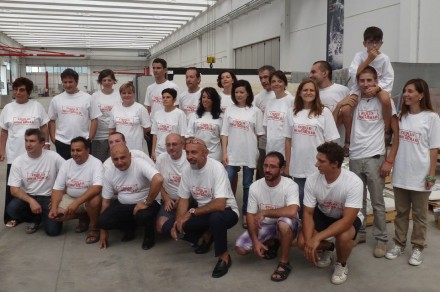 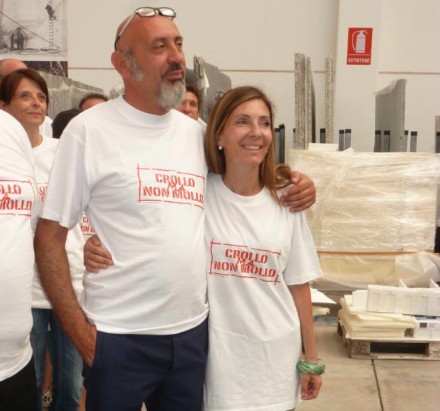