Markets: Marble for the miniature battlefield 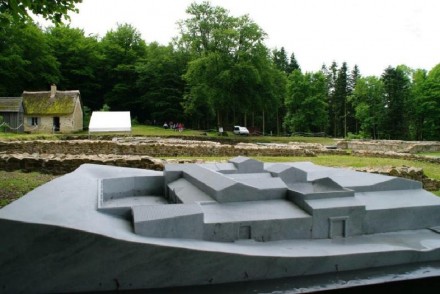 (September 2012) The first question which pops to mind is: why? Why did the Bibracte Museum chose marble to make a model of a battlefield and living quarters dating back to Caeser’s times and the Gallic War? Most such models are made of wood.

Ghislain Mored de Rocheprise, Director of Lithias Company, which specializes in computer-generated stone carving, is quick to give an answer: „A miniature replica in stone is always still an attraction in itself, prompting interest in the theme.“ 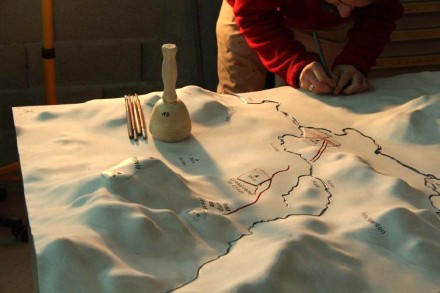 Also the mock-up of the Gergovian battlefield takes on a special aura: „By polishing the edges of the mock-up it looks as if we had lifted the venue right out of the ground on which the action took place.“ The veins in the stone brought life into the hills and valleys. Local Gris de Villette marble was used.

The two mock-ups, financed by local Offices, the French State and the European Union, were recently unveiled for the public.

The Bibracte Museum is a research centre for pre- and post Caesaerian Celtic culture. It is situated in Saint Léger-sous-Beuvray near Dijon.

Caesar mentioned the site of the recent excavations as a city by the name of Bibracte with a population of several thousand. Near what is known today as Clermont-Ferrand lies the Gergovian plateau, where Rome’s legions fought and won against the local defenders. To be precise, these were not only Gallic troups, but rather a conglomerate of various Celtic and other indigenous people of the area including what is known today as Switzerland.

What makes Bibracte so interesting for historians is the archeological ruins. 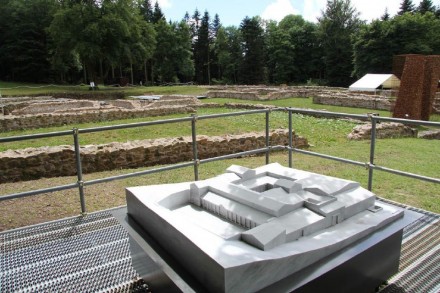 They originate from a dwelling area erected shortly after Caesar’s victory over Vercingetorix. The building complex is remarkable as it carries all the distinguishing elements of Roman architecture of the time. „The buildings and style clearly demonstrate how quickly the Celtic upper-class adopted the style of the vanquishing Romans“ according to a museum press-release. 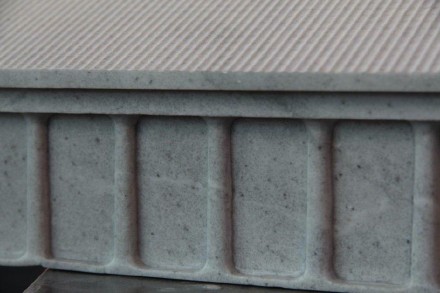 The stone mock-up is not only an attraction for visitors but also helps archeologists in their work. Ghislain Moret de Rocheprise: „One immediately sees the perfect symmetry of the complex, freeing the view for details beyond the obvious but always within realm.“

In a first prototype a mock-up was finished in cellular concrete. Moret de Rocheprise worked the raw marble block with the help of a CNC-lathe. The finishing touch was applied by the stonemason’s hand the old-fashioned way. On-Situ company also participated in the 3-D visualisation.