Latest news: What the stone can and what it can’t 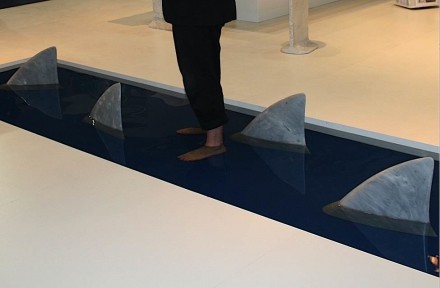 (September 2012) The 2009 Marmomacc had brought a revelation in stone design: It was the shark fins made of marble by the Italian Marsotto Edizioni (see photo above). These little objects, which for most of the visitors only were fun, had a practical function as everyday-tools: they were meant to be used as doorstoppers.

The idea was in so far a quantum leap in stone design, as the designer James Irvine had placed the material and its peculiarities in the focus of his creation: doorstoppers need to be heavy, and stone is heavy. 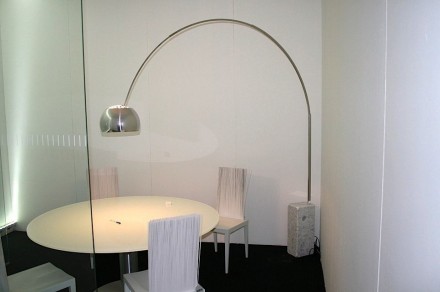 The designer had even found a solution to move that object with its foot of nearly 50 kg: the hole through the stone is meant to put a broomstick through…

Another example for a product design orientated along the peculiarities of the material is the lamp „Arco”, created by the Italian Achille Castiglioni in 1962 (see below).

In contrast to such examples, most ideas for stone-design let tone substitute another materials – which in most cases does not make sense: e.g. taking a bath in a massive stone-bathtub would have to start with warming up 1,5 t of stone!

Peter Becker, editor of Stone-Ideas.com, the online magazine for architecture and design with stone, has been following design ideas from all over the world during the last decade.

In his lecture at Marmomacc 2012, he will present examples for a New Stone Design which has come up in the last years and which has the peculiarity that it has the material in its focus: the doorstoppers and „Arco” make use of the weight of stone, other products use the material’s hardness or its capacity to store energy.

Yet there are much more aspects of what the material can. Just to name a few: stone has a surface (which invites to touch it!), it can carry a home feeling, spectacular is its longevity and simply striking may be its veins.

The lecture will work out these characteristics and show examples how they can be used in product design.

This is of course an interesting field for industrial designers and interior architects – but is it also of interest for the stone industry?

Oh yes: as waste from the stone production can be used for many of these products, the quarry owners can make an extra profit; a mass production of the objects would give a new demand for stone technology; and such products being present in many households would do an excellent and permanent free PR-work for the whole stone industry.

What an enormous consumers’ demand for beautifully designed products made of a 100% natural material!