Architecture: curved lines across the façade 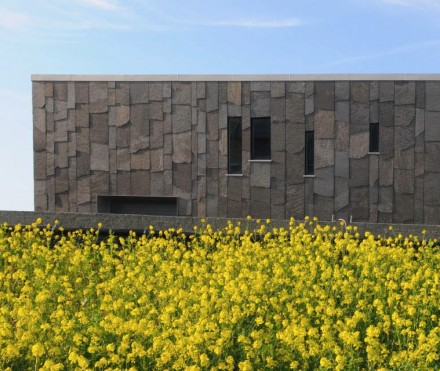 (October 2012) Norway has a number of peculiarities, some of which are awe-inspiring whereas others of which are quaint. The former e.g. applies to Norway’s coastline what with a total length of 25,000 km is caused by innumerable fjords carved into the mountainous coast.

Quaint, on the other hand, would best describe the some of the cities or „by“ in Norwegian: Oslo is the capital with a population of approx. 500,000 followed closely by a number of settlements that would only barely pass villages in other countries.

Brekstad is one of them with a mere 1,800 inhabitants according to Wikipedia. It is a good example for another Norwegian particularity: many „byer“ (plural of „by“) have a „kultursenter“ (cultural center) with a program one might expect of a full fledged city. 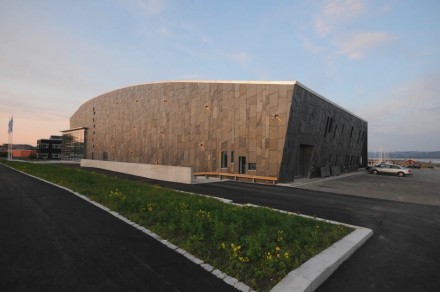 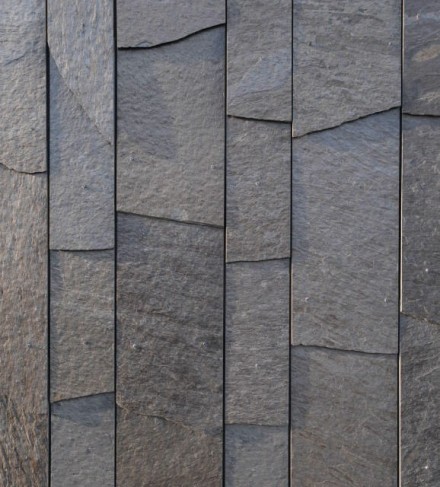 One edge of the slabs is left raw, ergo less time and effort for cutting. 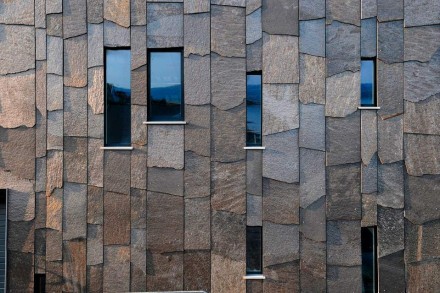 Another cost-cutting method: slabs are used in a total of three widths (40, 50 and 70 cm) optimizing yield of the raw material. The slabs are 12–18 mm thick. 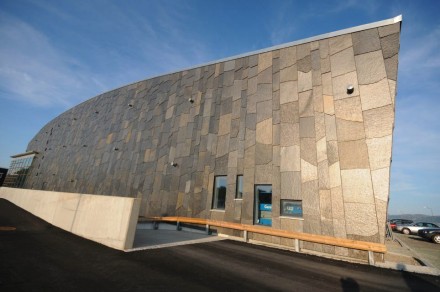 Some may have seen the curved lines which appear when a breeze sweeps over the fjord. The façade suddenly comes alive, almost wild and raw. Ease in care of this natural material will have a positive effect on cost efficiency in the long run.

The substructure is made of plywood with an insulating layer and rear ventilation. A membrane protects the walls from rain. Using steel in the substructure would have caused costs to skyrocket: due to the salinity a special non-corrosive variety would have been needed.

The stone plates are affixed my means of 3 or 4 nails in the substructure: two nails at the top put the slab into place and one or two at the bottom prevent the wind from tearing a slab up. The raw overlapping edge of the slabs gives plenty of grips for stormy winds. 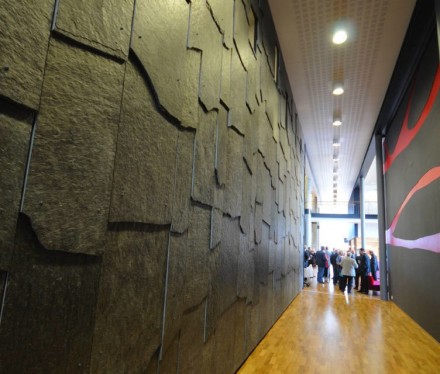 The same type of wall can be seen on the interior. 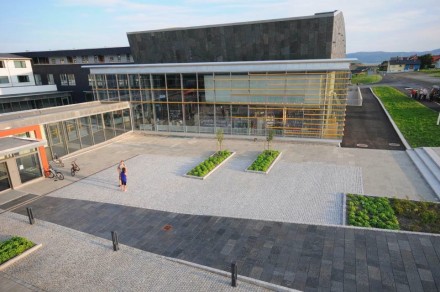 Our photo shows the main entrance with slate flooring.

The building has three stories as well as a basement and a total area of 6,500 m². It contains a theatre with 445 seats, a cinema with 135 seats, a library and a gallery as well as various rooms suitable for exhibits.

The complex is also accommodates a hotel with 17 rooms and two suites, as well as 8 flats with surfaces of 50 to 135 m² for added value to the town. Finally an inner court with a Japanese garden and terrace complete the picture.

Total costs are estimated at 65 million €.

For aficionados of rocky landscapes with mountains, canyons and cliffs we recommend a ride along the 18 National Tourist Routes in Norway.