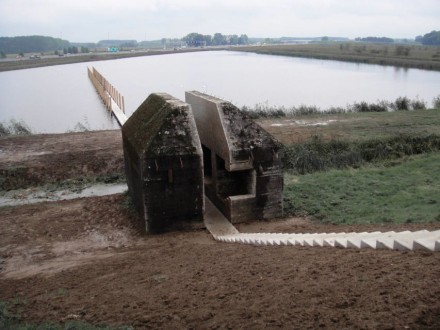 (November 2012) An unusual project involving diamond wires was recently called to life in the Netherlands where a WW II Bunker was sliced open right down the middle. It was part of an initiative by which the Nieuwe Hollandse Waterlinie (New Dutch Waterline) is to be conserved but also opened to the public.

The defence line was erected in 1815 with the aim of flooding large portions of the land if necessary. The Dutch struggled against but also fought with the help of water – an idea which dates back to 1589 when enemy troops were stopped dead in their tracks as the Dutch broke their own dykes in self-defense. In 1629 the tiny nation improved their method and successfully stopped an attack by France. 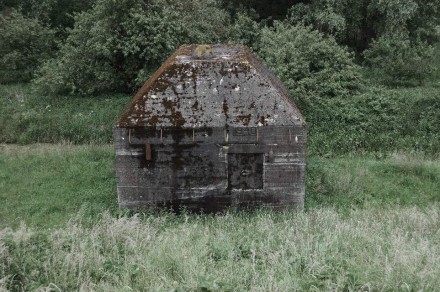 In the 20th century the system of canals and locks was complemented by 700 bunkers. 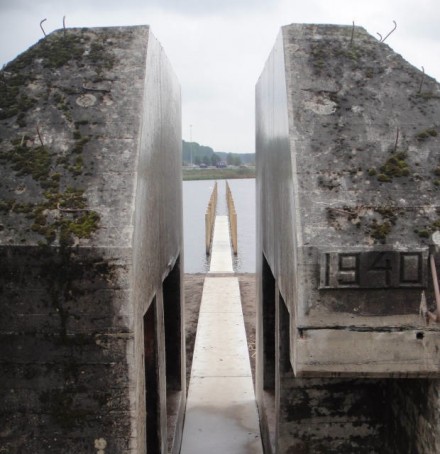 Rietveld Landscape/Atelier de Lyon with a team of landscape architects and artists conceived a unique work of art by slicing bunker nr. 599 down the middle allowing visitors to saunter through it and view flooded areas. The impression is bizarre to say the least: the defense is heavily damaged, next to it, traffic and the buzzing of the highway reinforce the impression of a time-warp. One cannot help but reflect on European history.

And so the producers of the film documenting the slicing of the bunker somehow lost touch with reality. „It’s very dark at the center of a stone … I could drill a hole toward the stone, but as soon as my drill gets there and I retract my drill, light falls into the center and I still won’t know the secret of the stone.“

The concrete colossus didn’t give up without a fight according to Carlo Veldhuizen: „It was made from a poor type of concrete, with exceptional good quality of steel re-enforcement.“ Veldhuizen is a managing director of Dikkerboom a specialist in concrete drilling. With friendly support by Styrka Diamond Tools who supplied the wires the optimal solution was finally found.

Guiding the cutting tool was particularly important: to ensure that the width of the cutting edge remained constant, it needed frequent adjustment and tensing. The work was carried out in a water protection area so cooling water was collected and recycled constantly.

At the thickest point, the wire had to slice through 2 m of concrete on a length of 7 m. It took a total of 40 hours, 5 full working days. Finally a crane lifted the midsection out, the heaviest piece weighing 2.5 t.

The video ends with the philosophical tidbit: „Thoughts can cut through everything. The mind is free.“