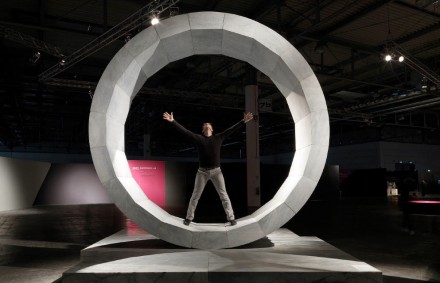 (November 2012) Marmomacc’s favorite motif was the „Stone Gate“ circle in Hall 7B, outdoing other pieces by its sheer size but nevertheless a decorative eye-catcher: 3.80 m high and 1.20 m wide comprised of 20 modules. Together with the stone base the it tipped the scales at 27.3 t. 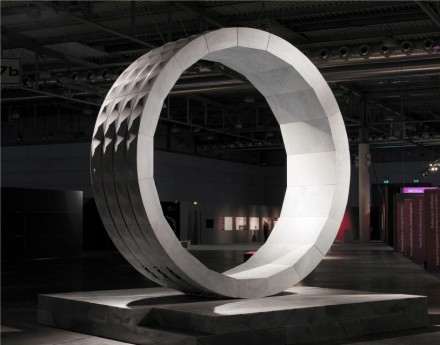 „The Circle is complete“ one might cry out, or so the brochure to the project would have it – a cry of jubilation referring to the fact that in early times of building in stone, only arches were architecturally feasible, outstandingly exemplified by the Pantheon in Rome or numerous bridges. Each of the blocks was held into position by mere gravity and the final stone as key.

One might also soberly note that „Stone Gate“ combines stone with modern material – 20 stone modules are girthed with 3 steel bands holding them together. 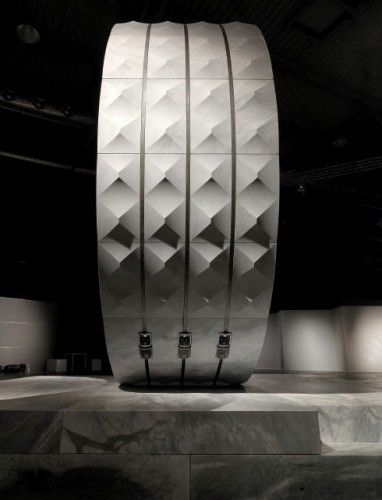 The stone’s inherent pressure resistance is increased by traction resistance through the outside pressure of the steel opening an array of new possibilities.

The difference between this and other projects with large stone circles e.g. revolving in a fountain, is that the latter were always made of a single piece of stone with a high price and limits with regard to transportation. But if, as in the case of „Stone Gate“ modules are used, construction costs suddenly become affordable.

What at first sight might appear as technical play and games in fact opens up new markets. Planners like to decorate their buildings with works of contemporary art. We reported on this subject recently with reference to the Stonetech fair in Shanghai 2010 (see link below). 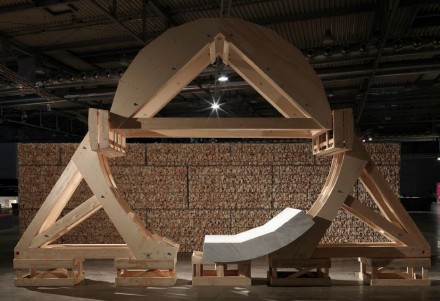 Setting up the elements of the arch was a demanding piece of logistical artwork in itself, as can be deduced from the workaround which was implemented. Those involved in setting up the circle tell of a tricky moment, when the two ultimate of the modules were to be lowered in to the circle when suddenly some of the lower elements began to shift outward. Work was immediately halted – the fugitive pieces returned to the circle. Note that each module weighs some 500 kg.

After some time the source of the problem could be defined: the vibrations of a running motor were conveyed to the construction. „Now we know how carry out such a feat“, agreed designer and engineer jovially.

But the best of the creative hall 7B at this year’s Marmomacc almost went without notice: it was a video installation by the title of „Homo Faber“, in which natural stone was finally presented correctly. 6 films, each of which lasted 60 seconds, showed the way stone goes though the various stations of 6 companies.

In contrast to the usual film material what with its usual pathos, the film material conveys the fascination of natural stone from the moment it leaves its alpine cradle through cutting and slicing all the way to its final steps at the hand of experts who morph it e.g. to a beautiful mosaic.

The idea for the installation came from Damiano Steccanella of Pibamarmi and was realized by Visto Architectural Workshop Project. The films were produced by Studiovisuale in cooperation with (in alphabetical order): Budri, Essemarmi, Il Casone, Lithos Design, Pibamarmi und Serafini Luce.

We have only one point of critique: the producers could not but incorporate one big bang as the showed quarrying with the help of explosives. It would have given the branch a more contemporary image to show stone quarried with rope saws.

To date only one stream has been made available on line.

Short montage of the clips