Briefly noted: for all who behaved well in 2012 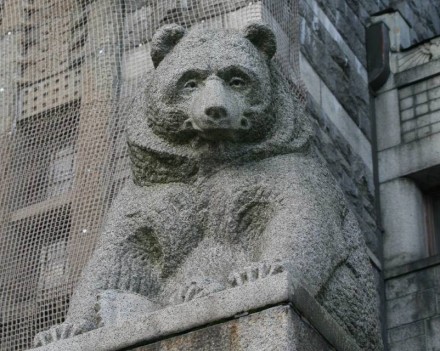 (December 2012) Carmen Magán and Juan Cabeza of Escultura-Opaso have specialized in realizing customers’ wishes. „A photo or an idea provided by the client is usually enough when asking for a quote. We can adjust our work to your budget“.

„Alpha Beta Gamma“ could conceivably be a therapeutic tool, i.e. for speculators or bankers during times of financial crisis. Whenever stocks plummet they could build little mews, towers or factories with the help of their building blocks.

Keys are often misplaced, if not lost altogether. An original key hider by Canadian sculptor Stephan Yettaw solves this problem.

Business gifts in natural stone by German based Stach 2000.

Gift idea from Great Britain: A stone at the door stoop indicates the weather outside.

Business signs in stone are produced by US Natural Rock Designs Company.

Plates made of petrified wood are on sale by British Stonefish Company.

Stone houses for the birds and for man’s best friend. The idea of a „Pets Village“ made of travertine and treated to resist fouling comes to us from Italy.

The financial crisis and the shock of Fukushima. Japanese artist Hirotoshi Ito presents contemporary themes in a tongue-in-cheek combination of materials.

Thoughts on the path to the brain. The American sculptor Somers Randolph designs winding, though clear shapes in alabaster, marble and other stone.

Play on stone. Many of sculptor Ulf Eggert’s works are chock full of humour and vitality.