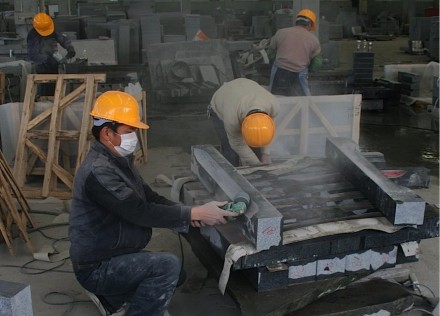 (January 2013) November 2012 once again brought reports of catastrophic working conditions in Asia. This time it was a conflagration in a textile factory in Bangladesh’s capital Dhaka where 124 laborers working in the top floor died. The building was equipped with emergency exits but these lead through the middle of the building instead of along the outside down to street level. The ground floor was an inferno already when workers attempted to escape making their flight impossible.

Allow us to reflect upon the case in point as an example of poor labor conditions and once again draw attention to Asia’s stone branch. What has changed since reports of child labor in gravestone production made the rounds in the wake of which labor conditions in some factories became an issue as well?

Much ground has been won by the campaign at least according to our survey.

Note that the following compilation holds true only for those companies cooperating with the organizations. And they are but a handful among all the producer of natural stone in Asia.

Child labor is not an issue for these producers.

As far as the working conditions are concerned enterprises have improved substantially. They adhere to standards of the International Labor Organization (ILO) and offer courses in safety at work, health at work or entertain regulated working hours. The organizations publish detailed information of their standards on the web.

The organizations’ concept seems successful. The idea is to achieve improvement by understanding and insight, not by dictating change as was the case in colonial times.

To this end the organizations send delegates to the companies as good-will ambassadors who propagate the standards. The salient point is that the carefully schooled delegates must stem from the target country.

Certification is the aim. The audit is performed by independent third parties. If passed the enterprise is awarded a certificate which may be used for marketing purposes.

But it should be noted that the assumption of below standard activity cannot not be drawn merely from the fact that a company is not certified. Certification is a quality control valid only for the company which earned the seal of approval.

Buyers can be certain that an acceptable standard is maintained by a particular vendor, whereas voluntary self-control as propagated by some, is of little value.

Reservation is justified in asking whether improvement will be of a lasting nature. In the carpet industry, e.g. fair trade standards introduced in the 1990’s for producers renouncing child labor seem not to have lasted: visitors of late report of young girls and boys working the looms and companies who do not even attempt to hide the fact.

The point is to achieve a new moral tenure. Claire Adam of the Organization tft put it in these words: „We believe that a company must have its values right – in other words, it must want to make change“. Transparency is the right path to this end.

tft is an Anglo-Swiss cooperative organization embracing some 120 producers from Vietnam, India, China and Indonesia. The organization acts under the mandate of 21 traders from Great Britain, the Netherlands, Belgium, Denmark and Sweden. Its „Responsible Stone Program“ continues the work of the Dutch WGDN (Werkgroep Duurzame Natuursteen).

The Win=Win GmbH is by self-acclamation an „Agency for global responsibility“. Their program goes by the name of „Fairstone“ and focuses on China, where 50 partner companies participate. Traders include 21 agencies spread over Germany, Austria and Switzerland.

Xertifix, a non-profit organization, is also based in Germany. Its focus is on India, where 140 companies are supervised. 17 enterprises across Germany, Austria and Switzerland cooperate in the effort.