Architecture: Granite façades with the rhythm of Swing 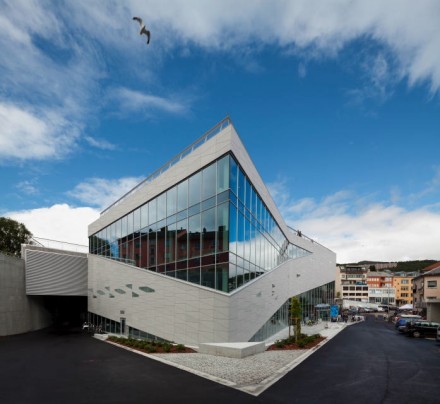 (February 2013) Perhaps a huge light gray granite cube once lay on the banks of Fannefjord in Norway, when trolls descended from the woods equipped with all sorts of tools and sawed away chunks of the stone block, honed parts of the surface, etched deep grooves into the siding and scratched jagged lines into the flanks.

That’s the impression a beholder might have when contemplating Molde’s new cultural center. 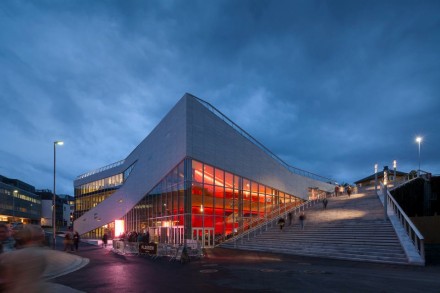 What did Danish architects 3XN do to bring forth the analogy to a paper silhouette cutout?

The solution is in the building’s location. Molde is a city of some 25,000 inhabitants but in the month of July, when the jazz festival begins, the city swells to some 100,000 culture-fans. A literature festival also takes place in Molde.

The cultural center thus had to be an auditorium for musical events but is required to double as a useful cultural complex for the rest of the year, i.e. a public library. 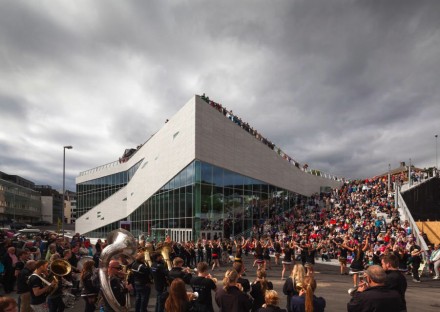 Architects designed a building that grows beyond itself: the steps leading to the roof-top terrace which run up the outside of the building are made of the same (Chinese) granite as the façade of the cultural center. At any activity at the foot of the steps they double as seating in a kind of amphitheater.

The roof has a number of different levels, connected by stairs and also made of granite. The roof-top terrace offers a grand view of the fjord and the mountains beyond.

The steps alongside the building also attract visitors as they are an important connection between the higher-level districts and the bank. The glazed corners and elongated picture windows open the cultural center optically and invite passers-by to come inside. 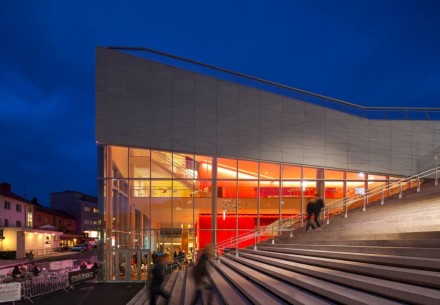 Particularly in the evening and in winter the warm atmosphere and ample wooden interior construction invite visitors inside. 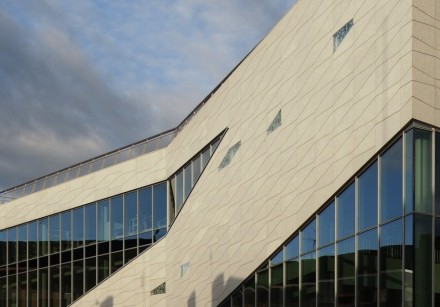 But 3XN wouldn’t be 3XN were the façade merely clad in right-angled stone slabs. Indeed, they chose the form of a flying trapeze. To a visitor looking up from below the lines merge to waves. Fitting for the jazz festival one might say the granite swings. The stone surface is flamed making it look pixely. The glazed cutouts are windows of office rooms. 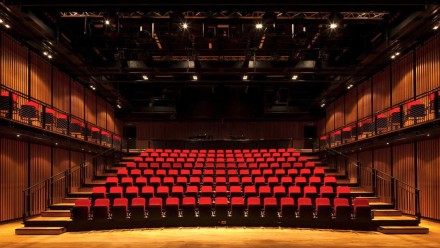 The cultural center has a floor surface of some 6,000 m² over 3 floors. It’s heart is a music- or theater hall. Add to that a surface of some 3,000 m² steps or seating leading down to ground level.

The citizens of Molde have obviously accepted their cultural center even if it sticks out like a sore thumb in clashing style. The name, however drew some critical voices: „Plassen“ merely means „Place“ .