Markets: „The ceramic tile is our competitor!“ 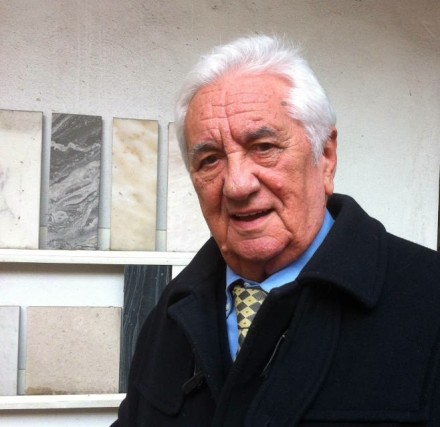 Marabelli will be celebrating his 80th anniversary this year. He made a name for himself as President of a number of stone trade organizations and as founder of Marmomacchine. His claim to fame is that he continuously brought forth new ideas for the stone branch. Since his retirement his daughter Barbara took over the role of editor of the magazine. His son, Flavio is honorary President of the trade organization Confindustria Marmomacchine.

Marabelli opens with a dramatic analysis of the situation: „Time is almost up“ he writes and continues: we could be standing before „the extinction of the entire stone production chain, including its allied technological sectors“ .

The statement may come as a surprise: more and more natural stone is being used globally. But Marabelli points to the source of the danger: „The common enemy … is ,stoneware’, in other words ceramic tile“. These products are on the offensive and boldly marching forward toward the high-end price segment while e.g. cheap natural stone imitation is being produced and passed off for the original.

Editor-in-chief of the French trade magazine Pierre Actual, Claude Gargi, has been addressing this trend in his lead articles for some time now: marketing efforts of Western stone-producing enterprises should look less toward competition from Asia and more directly toward gaining a slice of pie currently occupied by the ceramic branch.

Let us add: the stone branch needs struggling. Proof is that engineered stone kitchen countertops appeared out of no-where some years back, and, despite the fact that they are by no means cheaper than natural stone, they have taken up a substantial segment of the market.

Marabelli wants to take off where Italian and foreign representatives of the stone branch left off in the 70’s in Sant’Ambrogio Valpolicella during the trade fair held there: it was obvious that markets could absorb more natural stone if only the branch would do more to propagate the material.

At the close of the meeting, attendees reached a consensus that the stone branch would have to do marketing for its material. This idea had previously been brushed aside by some as newfangled nonsense.

Marabelli stipulates two conditions for his round table: the group of participants must be truly international and problems must be addressed frankly, in other words, the round table is not a forum for reciprocal pats on the back. Target groups might be the trade fair organizers.

In cooperation with Marmomacchine, Stone-Ideas.com has set up a Blog. Readers are invited to post their views; in Angelo Marabelli’s sense – no self-portrayals.

Results of the Blog could lay the foundation for a first round table which might take place in September within the frame of the Verona trade fair or outside it. It could, e.g., be followed by a second meeting in Xiamen in 2014.