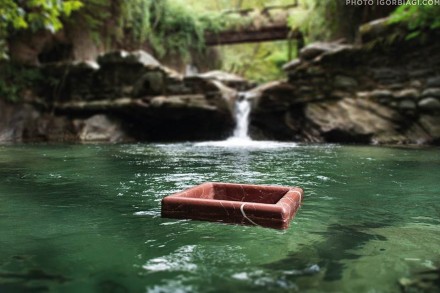 (March 2013) Some say that stone should retain its massive appearance to keep in character no matter what the result of the value added product. The result is that some objects cannot be produced simply because they would be too massive or heavy. Italian Dedalo Forme Libere Company (Dedalo Free Forms) has developed a novel technology by retaining the illusion of massive stone even though the stone is hollowed out and subsequently filled with resin.

The stone wall is a mere 5 mm thick. But stability is obtained based on the artificial massiveness. The overall plus is a considerable weight reduction.

Dedalo Company has its headquarters in Carrara. It was founded in 1960 and views its product idea firmly within the region’s marble art tradition: „In our view sculpture is the noblest form for marble and all stone for that matter“ says Elia Devotti, joint founder together with his wife and owner of the patents for the technology.

Shape stands in the center of the Dedalo product design, as the full name implies: free form in unlimited possibilities. 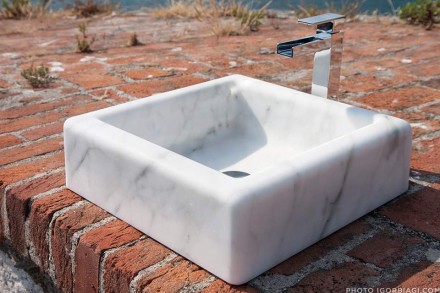 „Senza Bordo“ (Without Borders) is the name of a collection of sinks, some of which we show here. 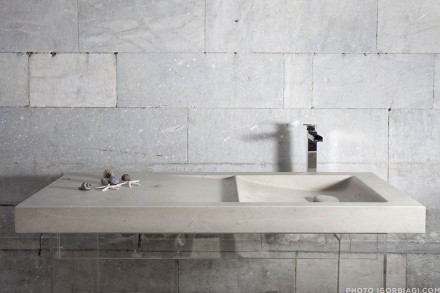 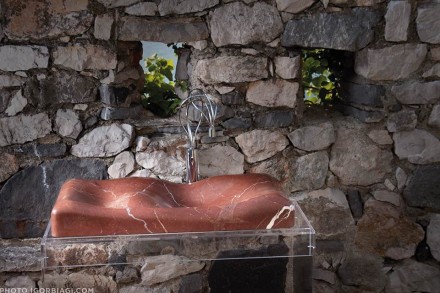 One idea was a sink with ripples on the interior, … 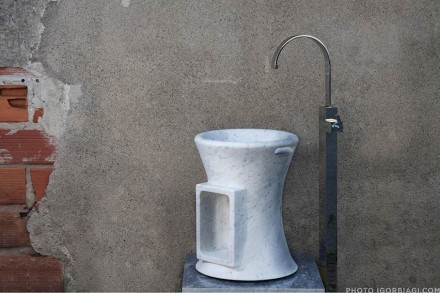 … another was a mobile sink on wheels. The box on the side is the space for the soap.

Questions posed were, among others, what to do with the remaining material after hollowing-out process: the ground stone can be used in the food and drug industry and is suitable in the production of granulate.

Dedalo’s next project is bathtubs and wash basins for outdoor use. Development, design and production take place in the company shop. Although the hollowing-out procedure is a mechanical process, handicraft is an important factor in production.