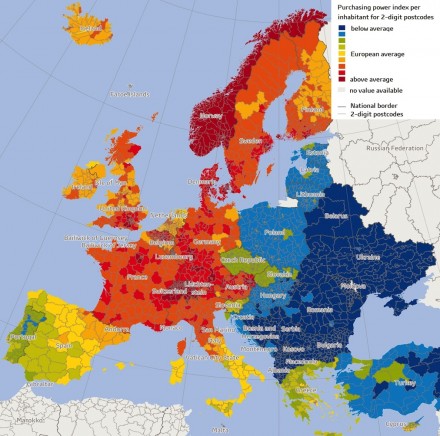 (March 2013) Natural stone is comparatively expensive and of considerable interest to the stone branch in locations with a high concentration of the well-to-do. The German-based GFK Geomarketing Market Research Institute has published an analysis of consumers’ available spending money, i.e. purchasing power. The analysis includes data of 42 countries ranging from the Ukraine and Turkey in the East to Iceland and Portugal in the West. 27 of the countries analyzed are members of the European Union, of which 17 trade in Euro. 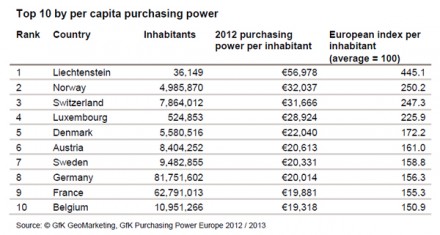 Interesting to note: usually the smaller countries have the greatest purchasing power lead by Liechtenstein with some 57,000 € spending money per capita in 2012. Second is, with a considerable gap, Norway (natural oil reserves) and Switzerland with some 32,000 €. Luxembourg ranks fourth (29,000 €).

The mathematical middle is occupied by Spain ranking 17th with some 13,000 € annually per capita spending money.

The Republics of Kosovo, Belarus and Moldova are the tail lights with under 2,000 € yearly spending money per citizen. The mathematical average is distorted by the fact that the „poor“ countries have practically no middle class but a relatively low level of really wealthy citizens.

Part and parcel of a precise assessment of purchasing power volume is the size of the market. When including this factor the order shifts: The larger countries lead the ranking. 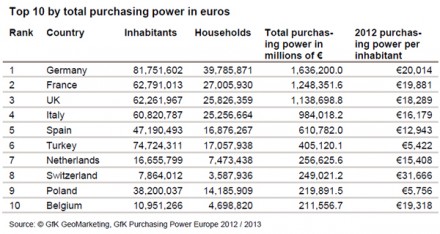 In 2012 the leaders were Germany, France and Great Britain followed by Italy and Spain. Despite the economic weakness in the Euro-zone-countries, nearly half the purchasing power is distributed among the heavyweights. The 39 other States share the remaining 53%.

The Study bearing the title „GfK Purchasing Power Europe 2012/2013“ is an annual publication. GfK (Gesellschaft für Konsumforschung) is one of the largest market research institutions globally.