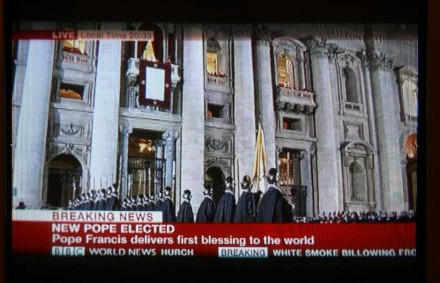 (March 2013) BBC World News’ reporters spoke of „humbleness“ and „humility“ as characteristics of the new Argentinian pope Francis I. when reporting about his first appearance in public at the evening of March 13, 2013 after the conclave. Certainly the new head of the catholic church appeared small, even tiny on the balcony of St. Peter’s. 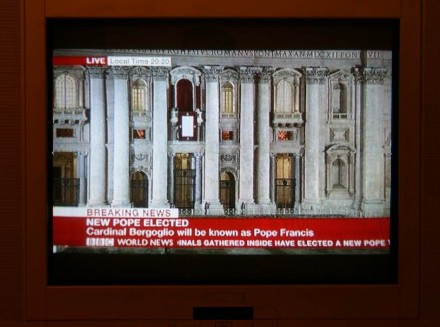 Hardly any building in the world has such columns in stone, more precisely: in Roman travertine, in its façade like St. Peter’s: they measure 28,3 m height and those in the middle seem to bear a triangle pediment which leads the visitors’ eyes magically to the pope’s balcony below. Above are the statues of Christ and the apostles each measuring 5,8 m height. Peter’s statue stands somewhere else, yet John the Baptist is among them. The whole façade and the surroundings were restored in the 1990s. Since then, the columns again have their historical white und the spaces between are again painted in a soft ochre. That tone was often used by builders of the 16th and 17th century to hide irregularities in the stone panels on a façade in order to keep the material costs down. 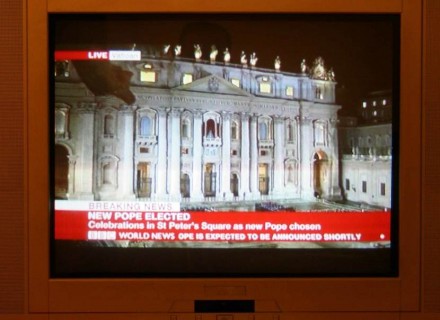 Yet the façade is not is not made of massive stone. The travertine only serves to clad to walls of some 7 m thickness or more made in brick, as sources say.

The façade was often criticised as „being too broad for its height, too cramped in its details and too heavy in the attic storey“, as the British architectural historian James Lees-Milne is quoted in Wikipedia.

Yet without doubt it remains impressing by its sheer size (45,5 m total height, 113 m large), and probably the first moment on the balcony amidst those columns must have been an impressive moment even for an experienced cardinal of 76 years like Jorge Mario Bergoglio. According to the BBC reporters he is used to cook his own meals and to ride to work by bycicle. 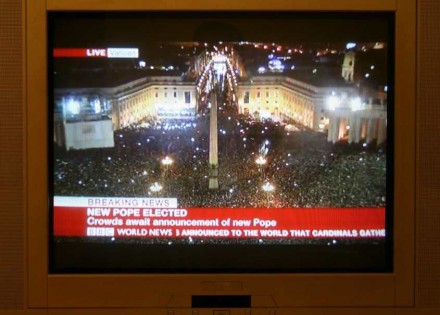 The arrangement of this „showroom“ of the Vatican does not only breathe dimension in terms of material, but also in terms of history: The obelisk in the middle of the square which a height of 25 m had been brought to Rome by emperor Caligula, and when erected in 1586 on order of pope Sixtus V., in the alleged place where St. Peter had suffered martyrdom, it was a technical challenge which then was reported again and again over generations. Famous are also Bernini’s colonnades around the square, also in Roman travertine, only to mention one more detail.

Francis I. had certainly felt this impressive scenery of greatness when he asked the audience to pray for him before he issued his blessings. 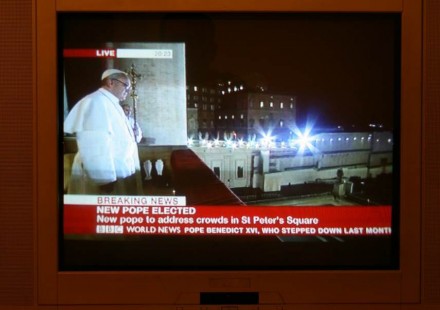