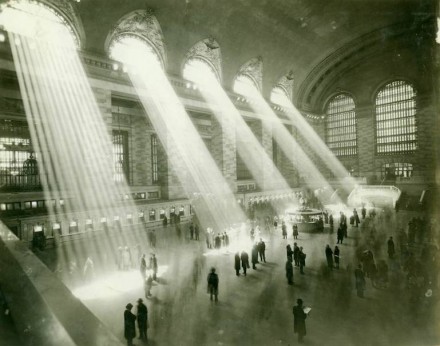 (March 2013) Once upon a time passengers disembarked from trains with romantic names likes „Empire State Express“ or „Twentieth Century Limited“. Needless to mention that natural stone had to play prominently, namely Tennessee Pink Marble for the flooring and Italian Botticiono as a plinth along the length of the walls as well as Pierre de Caen limestone from France above the plinth and all the way up to the ceiling. New York City’s Grand Central Terminal, which turned 100 years old this February is a building of unequalled generosity and elegance.

However: the French limestone cladding on the walls, high as a cathedral, is not quite what it seems. Alternating thin and thick layers of „Stone“ are fake and merely painted on the surface. 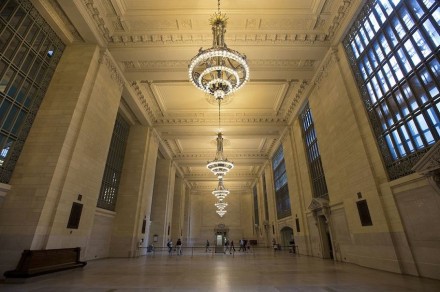 Nonetheless the terminal’s Vanderbuilt Hall, previously its concourse, what with its Botticino-plinth and fake Pierre de Caen are unequalled in elegance. Today the venue can be leased for private events. 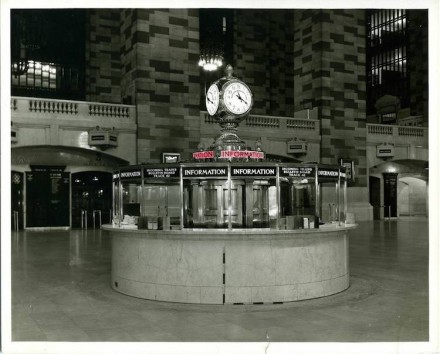 Botticino is also built into the information desk in the middle of the main concourse. The pavilion’s well-known attraction: „Meet me at the Clock“, became practically an idiom for travellers from all around the world. 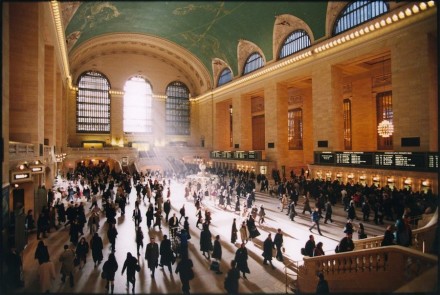 And then there are the two stairwells in the main hall, also made of Botticino Marble: their paragon is in the Paris Opera! 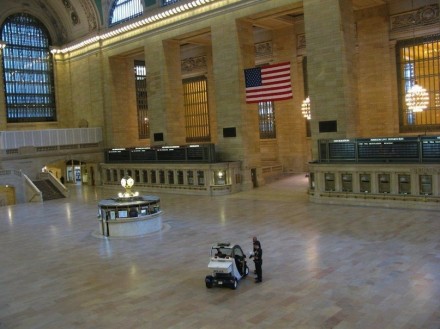 Many a story can be told revolving around the natural stone in and around the building. E.g. regarding the flooring in Tennessee Pink: during renovation in the millennium year, the original quarry was revived by Tennessee Marble Company. The seams between the slabs are a bit thicker (1/8 inch) compared to (1/16 inch) the previous dimension – not visible but important for buffering vibrations caused by rail traffic. The Marble Institute of America (MIA) attributed the 2002 Pinnacle Awards for the restoration work.

Or take e.g. the material specifications imposed on commercial enterprises in the terminal. Not allowed are: „materials that, in the Landlord’s opinion, are of low quality, non-durable, and/or difficult to maintain“, as expounded in a 110-page-document. Explicitly allowed: natural stone. 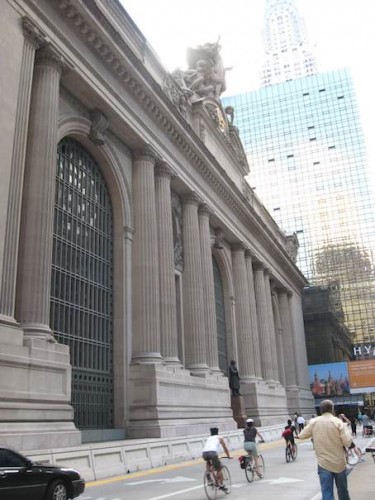 The outer façade with its plinth in Stony Creek Granite originating from Connecticut is complemented by (real) Indiana Bedford limestone above. 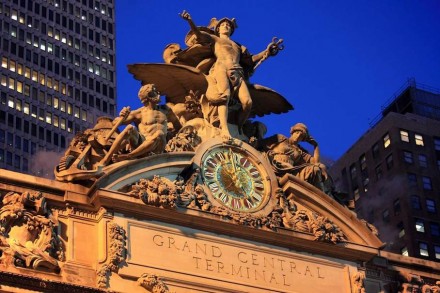 Powerful sculptures can be admired, e.g. Mercury, Minerva and Hercules in a group.

But enough on the theme of natural stone. Let us devote a few thoughts to the building itself.

Grand Central Terminal was built in place of its predecessor Grand Central Station and opened to the public in February 1913. It was one of the complexes which supported the image of USA as the most modern country in the world. The concept of passenger traffic is literally path-breaking to the extent that some 650 passenger trains and 200,000 commuters can arrive and depart daily. There is a direct connection to the underground railway and an estimated 750,000 pass through the terminal’s halls daily.

One highlight of the time was the first-time use of a station for the new electric locomotive technology. The tracks are on two levels below ground above which a city within the city was built with exclusive shopping venues, restaurants and much more.

The impulses of the complex were by no means restricted to commuter traffic. Citizens’ values, too, were touched: in 1967 the building was designated a City Landmark but the rail company wanted to erect a high-rise. Citizens’ initiatives lead by Jacqueline Kenney Onassis fought their case up to the U.S. Supreme Court finally winning it in 1978.