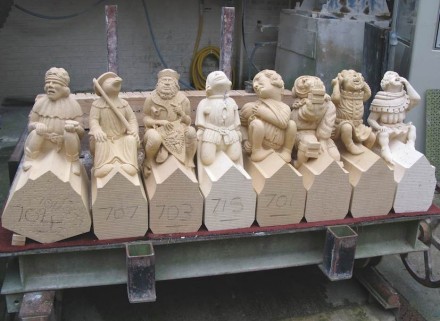 (March 2013) The challenges were great. To name just one: the 13 m tower with the mass of a building several stories high, was completely demolished and rebuilt. This posed particular problems for stress analysts: taking away such a mass can cause the entire building to crumble. 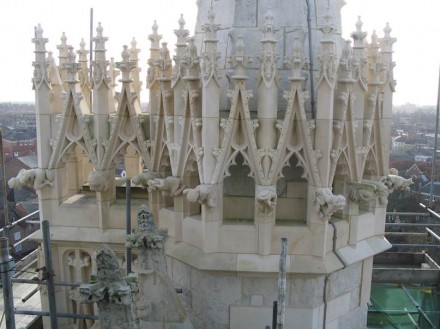 The Minster in the British city of York underwent restoration of the South Quire Buttress, Turret and Spirelet on the East Front. The work was now rewarded with one of the Stone Federation Great Britain prizes.

One of the tasks was to prevent runoff precipitation to seep into the stone walls. This was originally one of the major causes of damage to the building. Among other steps, a stone girth was reduced from 20 to a mere 10 single pieces. This, in turn, posed a particular challenge to stone masons because the tower itself was not symmetric and leaned slightly. Fitting the pieces required extraordinary precision. 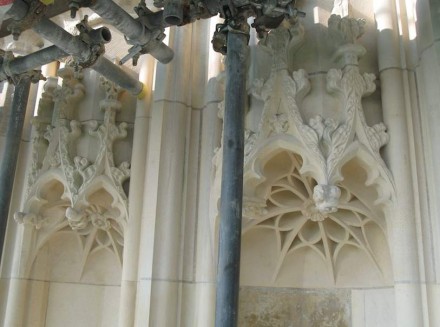 Reconstructing the decorative elements and arches was also elaborate. But finding material to replace the damaged magnesian limestone pieces was no problem. Active quarries in the area are numerous. The material was sourced from High Moor or Warmsworth quarries near Tadcaster.

Master Mason John David played down the level of challenge as nothing out of the ordinary for his team. „But it was a really big building site not often seen even for a Minster“, he finally admits.

Even a 3D-mock-up of the tower and the spiral staircase were finished. It was not imperative for the work but was needed to demonstrate the complexity of the tasks for decision-makers to grasp. The costs for the mock-up were marginal because of personal contacts. 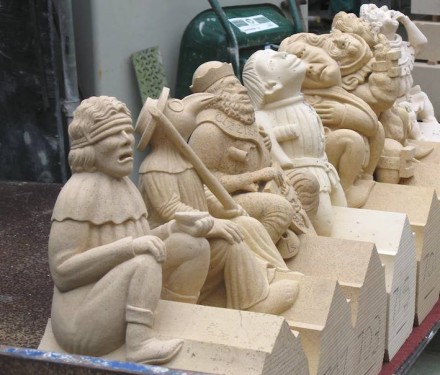 One of the highlights for the numerous stone masons was reconstructing the 20 grotesques which previously adorned and watched over the turret. There was practically nothing left of the original creatures – the craftsmen were given free hand to design their own gremlins. The only restriction was that they had to keep in the style of the original figures inside the Minster. This was also required of the clothing for the figures. „We didn’t want to imitate Medieval times, just stay within the style of our Minster“, according to John David.

The theme decided by the stone masons was „ailments and illnesses“. The transformation was a presentation from the wide field of medical problems right up to abnormal behavior. As was usual for medieval times, the presentation was drastic and unadulterated. Our photo gallery shows some of the 20 figures now perched at a height of 37 m.

We wish to point out two events which will take place around the Minster this summer. There will be a new exhibit around the building integrating the full box of tricks of modern presentation. And there will be an auction where interested parties can bid and acquire demolished pieces from the original building.